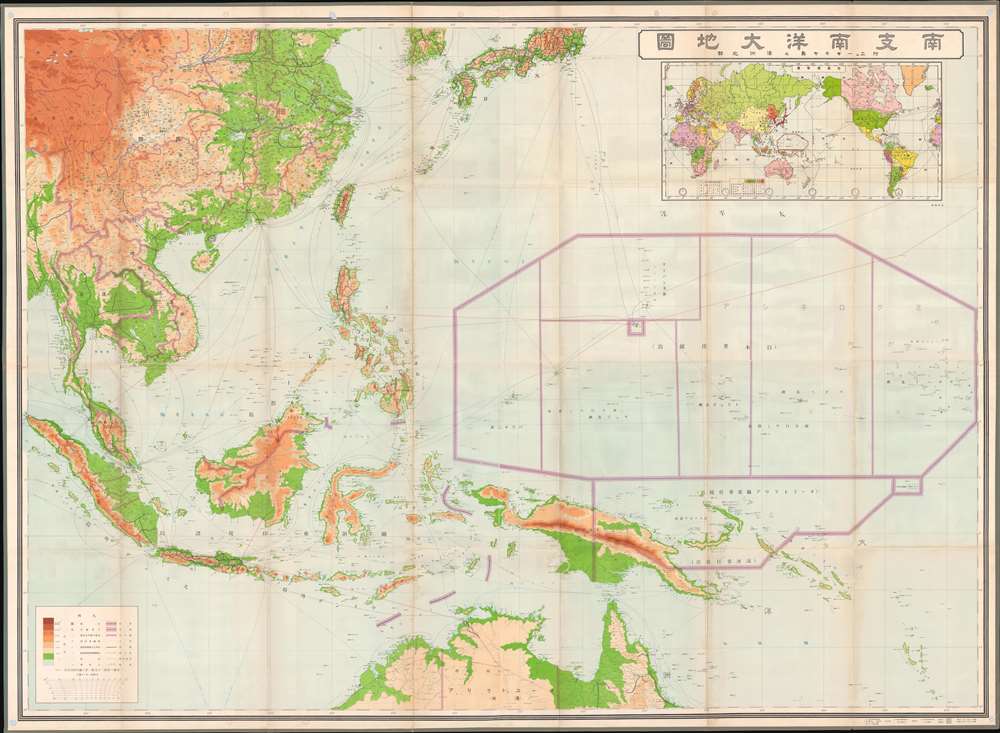 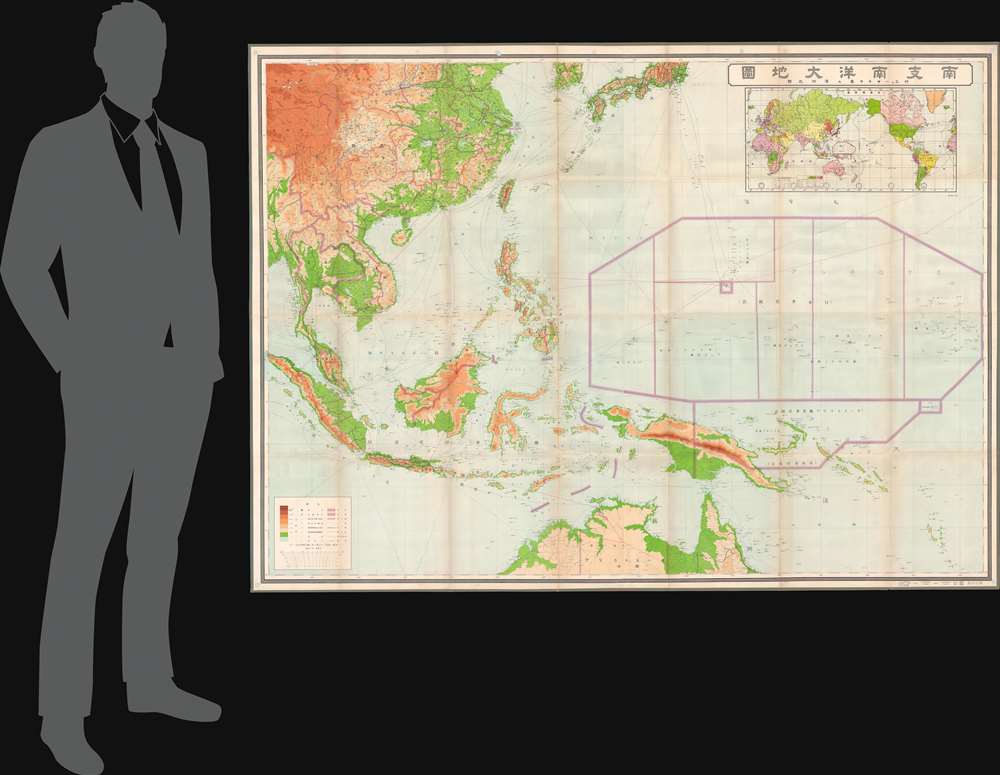 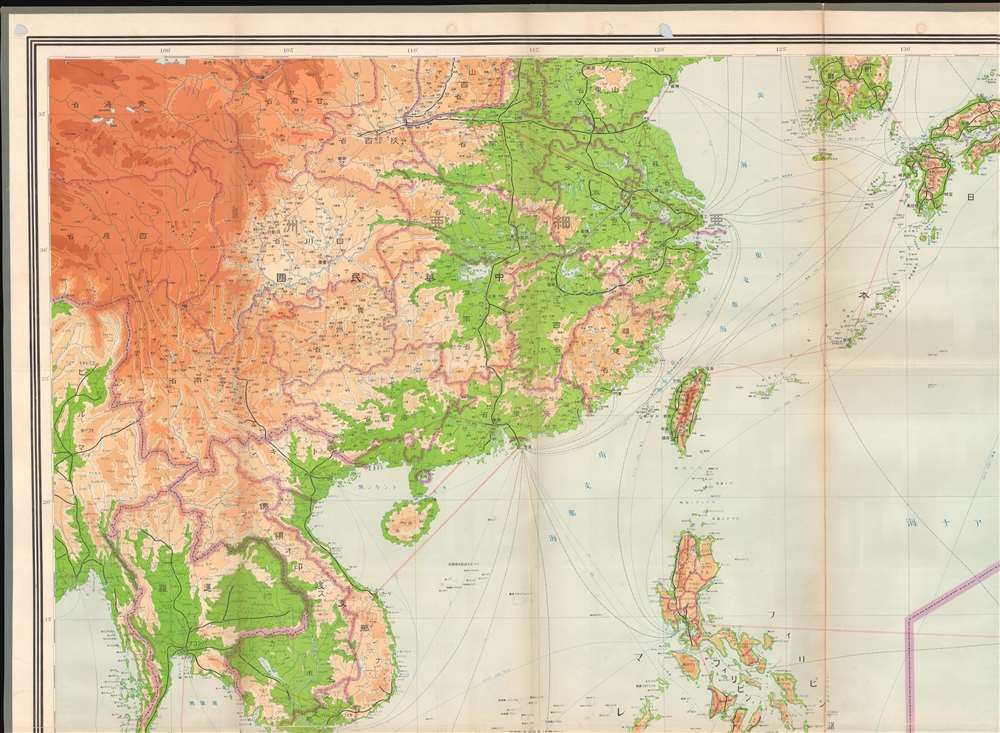 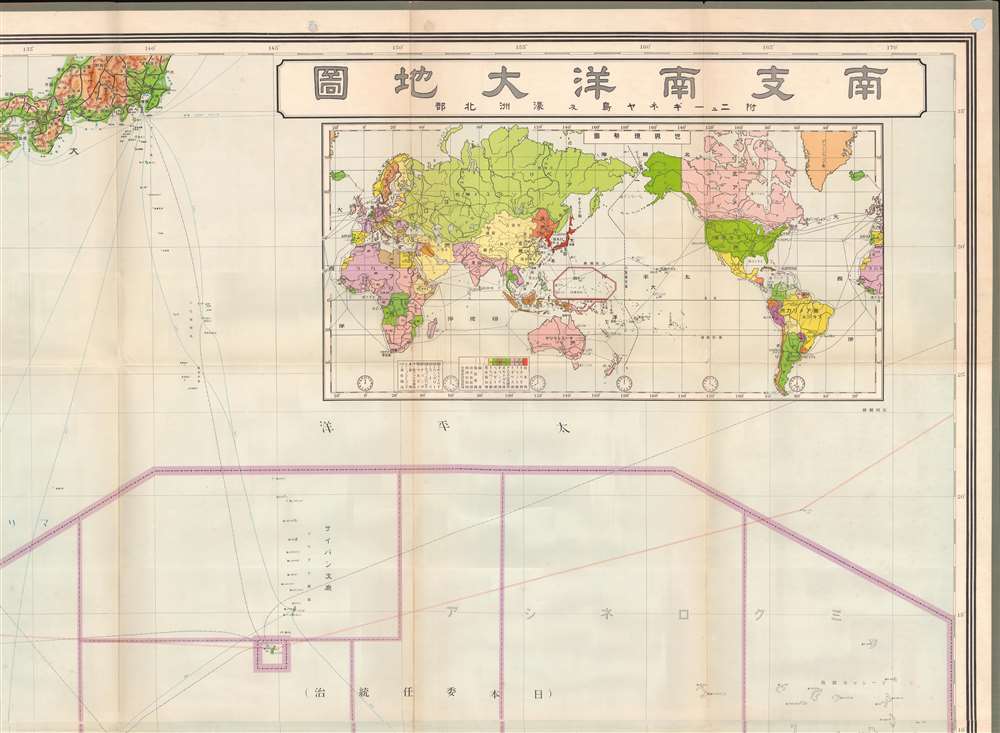 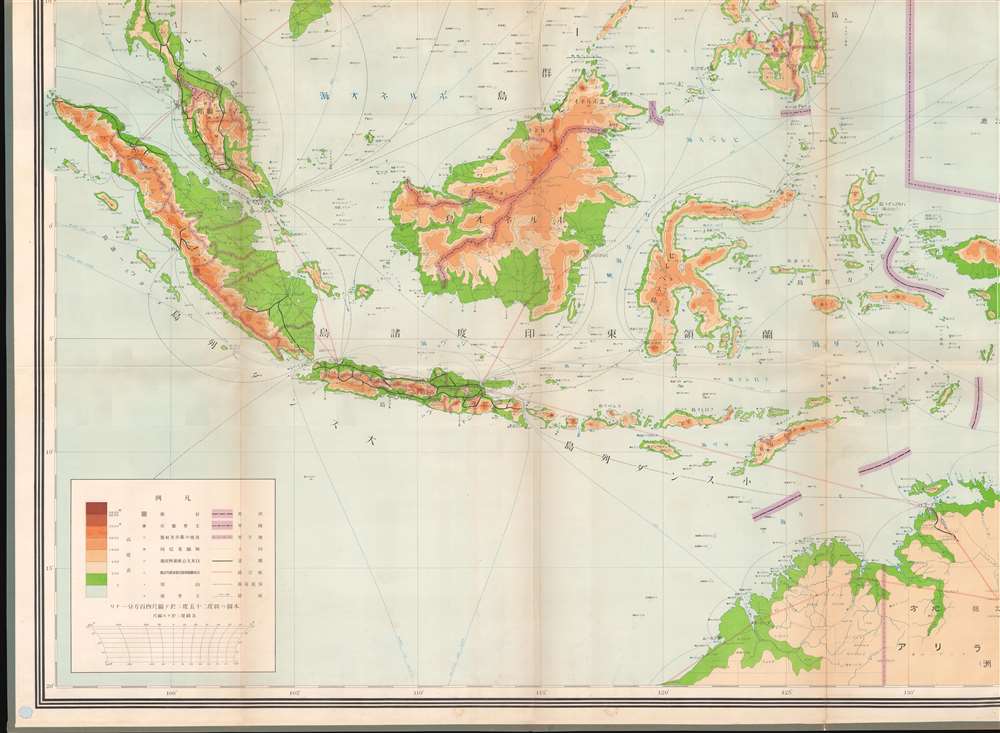 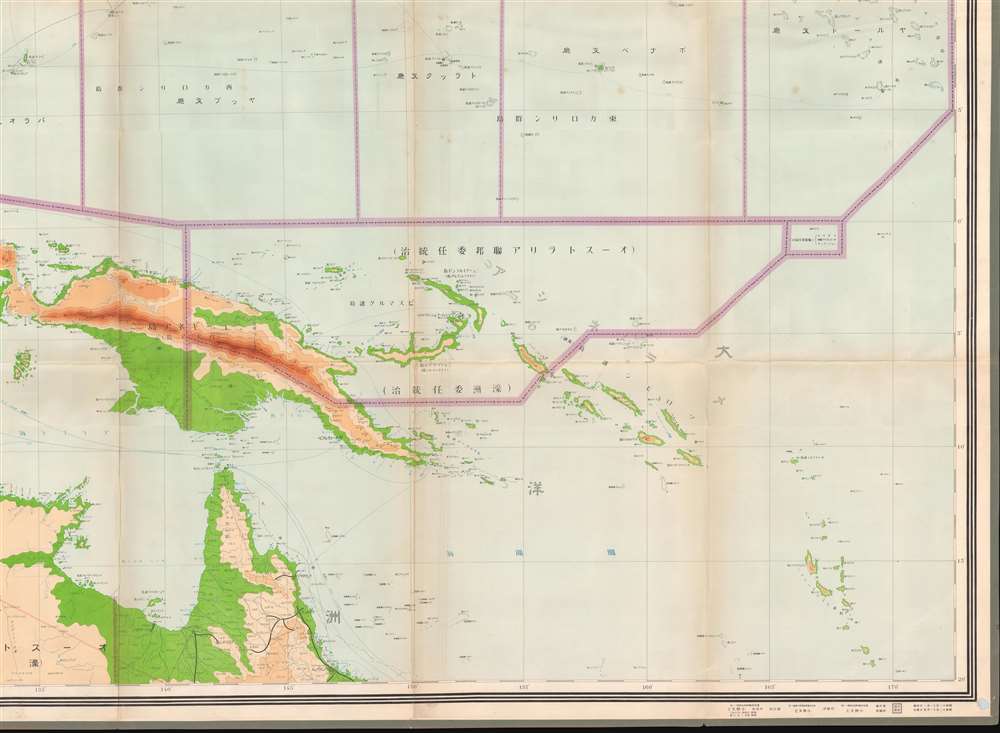 This is a very large and rare 1937 Kobayashi Matashichi map of southern China, Southeast Asia, and the South Pacific. The map anticipates Japanese interest in this vast and resource-rich region, an area soon to be engulfed in the Pacific War (1941 - 1945) and subsumed to Japanese imperial ambitions. Given its tremendous size and detail, it is likely this map was prepared for internal military use in anticipation of Japanese expansion into the Pacific, the East Indies, Southeast Asia, and China. Centered on the strategically critical Philippine Islands, coverage extends from Korea to Australia and from the Bay of Bengal to Micronesia.

The map's legend shows elevation and other geographic features, political boundaries, major cities, locations of Japanese consulates and embassies, telegraph, shipping, and rail lines, and information on how the scale was determined. An inset at top-right places the covered area in the context of the world map, which includes time zones, territories of different empires, and major rail and telegraph lines. Marked off prominently at right is the Japanese South Seas Mandate inherited from Germany after World War I (1914 - 1918) and the Australian-controlled Territory of New Guinea. It is likely this map was used for military or government purposes, and the grommet holes along the margin suggest that it was hung for regular reference.

By 1837, Japan had established a long-standing interest in the western Pacific and China Sea regions. This area was known in Japan as Nanyō (南洋) and in China as Nanyang, referring to the prevalence of Japanese and/or Chinese diaspora. Japan asserted hegemony over these areas due partially to the Japanese diaspora settled there, but also for the region's strategic and economic value. Japan's imperial ambitions required control of the Asia-Pacific to supply much needed raw materials for the ever-hungry war machine. As tensions with China worsened through the late 1930s, the overlapping but typically more populous Chinese diaspora was seen as a problematic source of anti-Japanese sentiment and financing for the Chinese war effort. These groups were systematically suppressed and co-opted to support Japanese interests.

This map was made soon after the full-scale outbreak of war between Japan and China, as the decisive battle for Shanghai (towards top-left) was raging. Despite regular success on the battlefield, Japan's strategy of pushing Chinese Generalissimo Chiang Kai-Shek to surrender failed. As Chiang's forces and a wide array of partisans, including the Communists, kept up resistance, Japan moved to cut off their supply lines. This, along with the need for oil, rubber, and other resources, eventually led Japan to invade and occupy, to one extent or another, much of the territory presented here, beginning with French Indochina in September 1940, and the Philippines in December 1941.

This map was printed on November 1, 1937 and distributed on November 5. It was printed by Kobayashi Matashichi (小林又七; fl. c. 1905 - 1943) working in conjunction with Senryūdō (川流所). The only known institutional holding of this map is at Kyushu University and it has no known history on the market.

﻿Kobayashi Matashichi (小林又七; fl. c. 1905 - 1943) was a prolific cartographer and publisher based in Tokyo who primarily made and published maps of Japan's growing empire in East Asia (Korea, Manchuria, China). He often worked with the publisher and distributor Senryūdō (川流堂, sometimes as 川流所). Learn More...