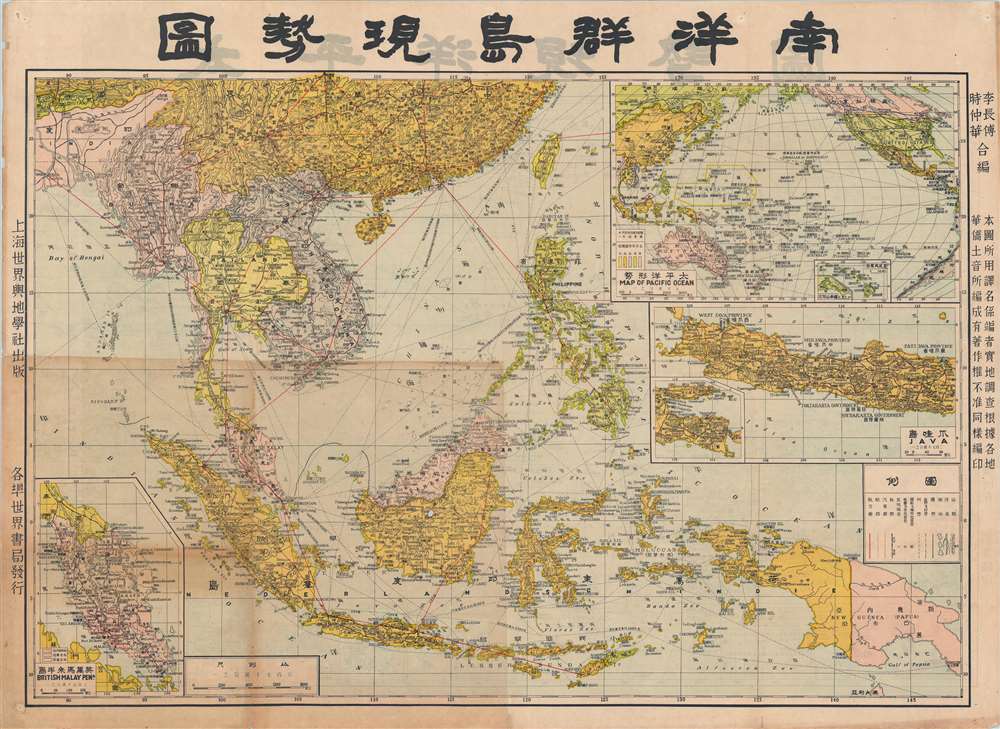 Insider knowledge about the Pacific War.
$550.00

An important c. 1936 Japanese map of Southeast Asia and the East Indies on the eve of World War II with a wealth of interesting manuscript annotations relating to subsequent war events. This rare map was edited by Li Changfu and Shi Zhonghua and published by the Shanghai World Geographic Society. Coverage includes Indonesia, the Philippines, Indochina, Malaya, Burma, Thailand, and southern China. The map includes three insets (of Java, the Malay Peninsula, and the Pacific Ocean, marking the colonial territories of various powers) and indicates major geographical features, road, rail, air, and sea routes, political boundaries, and major cities. Place names are written in Chinese and the Latin alphabet, and a marginal note points out that, in writing the Chinese place names of areas without a standard Chinese name, the editors followed the dialect pronunciation of overseas Chinese in those areas.

The verso map by the same publisher is centered on the Pacific Ocean and focuses on military affairs, showing airfields, primary and secondary military ports, major supply routes, overlapping areas of operation of American ships based in Hawaii and Japanese ships based in Yokosuka, various other lines of strategic importance, and the distance between major ports and cities. It has a scale of 1 : 30000000 and includes eight insets (clockwise from bottom-right: San Francisco, the Panama Canal, Manila and surroundings, Honolulu and surroundings, Singapore, Hong Kong, Tokyo and surroundings, and Vladivostok). There are also several stamps (off the coast of South America, near the Galapagos Islands, near Acapulco, and South of Java), noting where the American or British air forces had gained the right to use airbases. Most interesting, although the map itself dates from before the war began, there are several handwritten annotations in Japanese noting in detail the date of major battles in the first phase of the war (until the Allied landings on Guadalcanal in August 1942) as well as the forces arrayed on the Allied side, including the number and type of ships and in some cases the names of important ships (aircraft carriers, battleships).

It is possible that both maps were originally produced by the East Asia Economic Investigation Bureau of the South Manchuria Railway Company (滿鉄東亞經濟調查局), which would explain the emphasis on military deployments and resources (see Publication History and Census below). The owner who has made the annotations must have been very well informed about the course of the war (including Japanese defeats), especially given the censorship regime that existed at the time; it is certainly possible that they were a member of the Japanese military or government. Given that the map was published in Shanghai, the owner may have been a resident of Shanghai or another treaty port in China where information would have been less-tightly controlled than in the Japanese home islands.

Rise and Fall of Empires in the Pacific

These two maps show Southeast Asia and the Pacific during a period of tremendous transition, when the territories belonging to Western empires in East Asia had reached their apex, were rapidly conquered by the Japanese in late 1941 and early 1942, and were just beginning the process of being reconquered by the United States and its allies. Japan benefitted from European powers being distracted by the European war (the Netherlands and France were occupied by the Germans when Japan occupied their Asian colonies), as well as a genuine admiration of Japan on the part of many East Asians and a desire to throw off Western imperialism. The Greater East Asia Co-Prosperity Sphere (大東亜共栄圏), which in theory encompassed all of East and South Asia, was conceived as an economic and cultural union of Asian peoples under the tutelage of Japan and in opposition to the oppressive model of racial imperialism practiced by Western powers. In reality, despite a string of early victories, Japan had little hope in the long term of defeating the United States and occupying Western colonies throughout East Asia while also continuing to fight a full-scale war in China and maintain a significant force in Manchuria in the event of a conflict with the Soviets. Imperial Japan was so desperate for labor and resources during the war that it engaged in practices in Southeast Asia that were even more exploitative than those of the British, Dutch, French, and Americans.

This map was edited by Li Changfu (李長傅) and Shi Zhonghua (時仲華), published by the Shanghai World Geographic Society (上海世界輿地學社), and distributed by the Gebu World Bookstore (各埠世界書局). It is held by the Library of Congress and the Australian National University, and may also be held by the Zhengzhou University School of Earth Science and Technology (郑州大学地球科学与技术学院). The Library of Congress estimates that this map was published in 1936, and notes that it was folded in an envelope with the name of the East Asia Economic Investigation Bureau of the South Manchuria Railway Company (滿鉄東亞經濟調查局). Though nominally a railway company, the South Manchuria Railway Company had many branches and subsidiaries, including several investigation bureaus that were essentially informal intelligence units for the Japanese military. Since Li and Shi are listed as editors and not creators, authors, or cartographers, it is possible that they modified an earlier map produced by the Investigation Bureau.