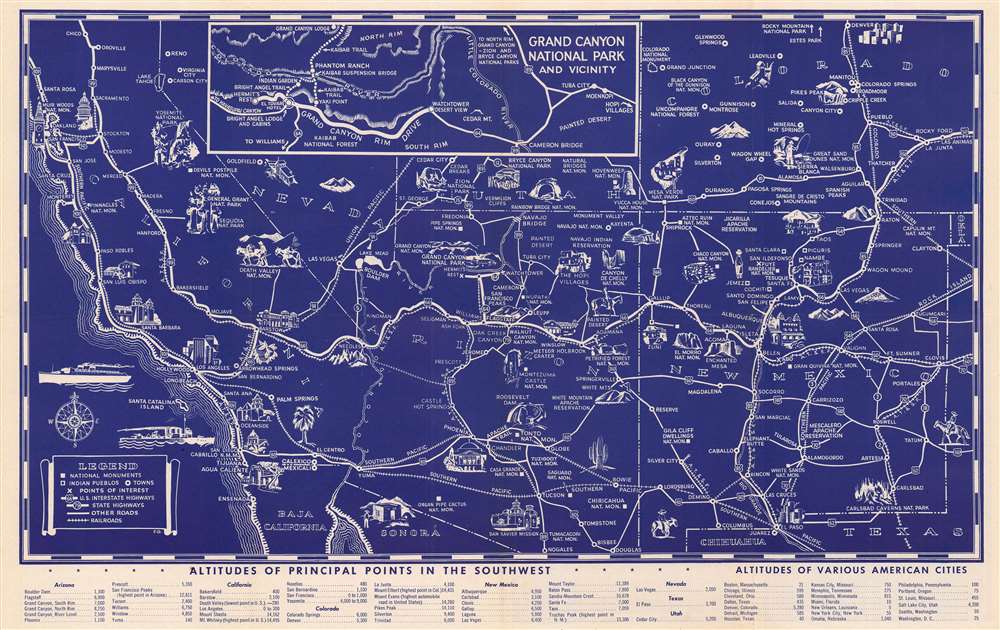 Promoting Tourism in the American Southwest.
$300.00

This attractive 1946 pictorial map of the southwest was produced by the Fred Harvey Company, the concession chain for the Atchison Topeka and Santa Fe line Railroad. At its peak, the firm ran 84 hotels and restaurants along the railway from Topeka to San Francisco, with many locations in Colorado, New Mexico, and Arizona. During the latter part of the company's existence, it began offering staged artist-demonstrators displays of Native American crafts, later adding 'Indian Detours, which took tourists in private 'Harvey Cars' from rail stops in Albuquerque and Santa Fe into Indian Country, to see Native Americans' 'real lives.' The present map dovetails with these promotions, combining verso imagery of Navajo and Pueblo artistic motifs with this detailed railroad map showing dozens of famous tourist attractions accessible to the railbound tourist.

The white-on-blue printed map spans New Mexico, Arizona, southern Colorado, Nevada, and California, and southern parts of Utah. Towns and cities are shown in relation to the Atchison Topeka and Santa Fe railroad, the Southern Pacific, the Union Pacific, and the Rock Island line. Throughout the map are illustrations of the many regional tourist attractions, ranging from natural features (the Grand Canyon Rainbow Bridge, Carlsbad Caverns) to Native sites (Hopi Villages, Chaco Canyon, the Painted Desert, Mesa Verde) to modern wonders (the Roosevelt Dam, Boulder Dam, and Los Angeles. (Alas, Los Alamos makes no appearance.) An inset map shows Grand Canyon National Park and its vicinity in detail. A table at the bottom compares the altitude above sea level of principal locations on the map with those of major American cities.

This blue-printed 1946 edition of the map appears to be scarce. We see eight examples catalogued in institutional collections. Eleven examples printed in the fifties and sixties can likewise be found; those we have identified from later editions are printed in brown rather than the blue seen here.

Founded by British emigrant Fred Harvey (June 27, 1835 – February 9, 1901) The Fred Harvey Company was a hospitality chain operating branded restaurants conveniently located (rent-free) along the Atchison Topeka and Santa Fe line. The first Harvey House was opened in Topeka in 1876, and its success led to the opening of more Harvey Houses down the AT&SF line, who considered the presence of the Harvey Houses a welcome promotional expense. Through the 1930s, the AT&SF funded Harvey ventures throughout Kansas, Colorado, New Mexico, Arizona, and California, ranging from lunch counters to railway newsstands to luxury hotels. Fred’s son Ford took over the chain on Fred’s death in 1901. Ford, an enthusiast of the southwest, would further incorporate the arts and culture of North American Indians living near the Harvey hotels and restaurants, to attract more travelers to New Mexico and Arizona. They established the Fred Harvey Indian Department in 1901, controversially hiring Indian artist-demonstrators to weave blankets and make pottery and jewelry in an annex of the grand Alvarado Hotel in Albuquerque, New Mexico. The company continued until 1965. Learn More...

Good condition. Reinforced at folds with some loss at junctures and extremeties of folds.