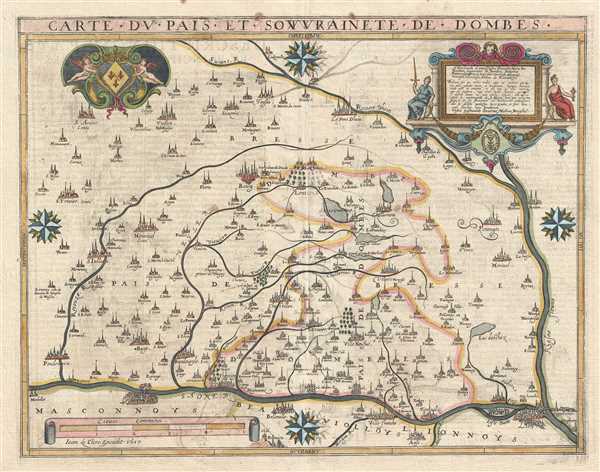 Early map of Dombes, one of the best water-bird hunting regions in France.
$500.00

This is a beautiful 1617 map of the Dombes region in southeast France by Mathias Mareschal. Oriented with north on the left, the map covers the then principality of Dombes from Montbellet and Pont-de-Voux south as far as the city of Lyon. Lyon, famous for its cuisine and gastronomy, is identified. The map is beautifully detailed with several towns, cities, ponds, lakes, rivers, and forests beautifully rendered.

Part of the modern day department of Ain, the region is known for its Bugey wines, which are generally aromatic and white. It is also known for its fine blue cheese, poultry, and fisheries. The region of Dombes, with more than a thousand lakes and ponds, is more famous for its pisciculture. It is also considered as one of the best hunting regions for water birds in France.

The map includes an elaborate cartouche in the top right with a dedication to Princess Marie de Bourbon, Sovereign of Dombes. Another cartouche in the top left features two angels holding up the coat of arms of the Duke of Bourbon. This map was published by Jean Le Clerc in 1617.