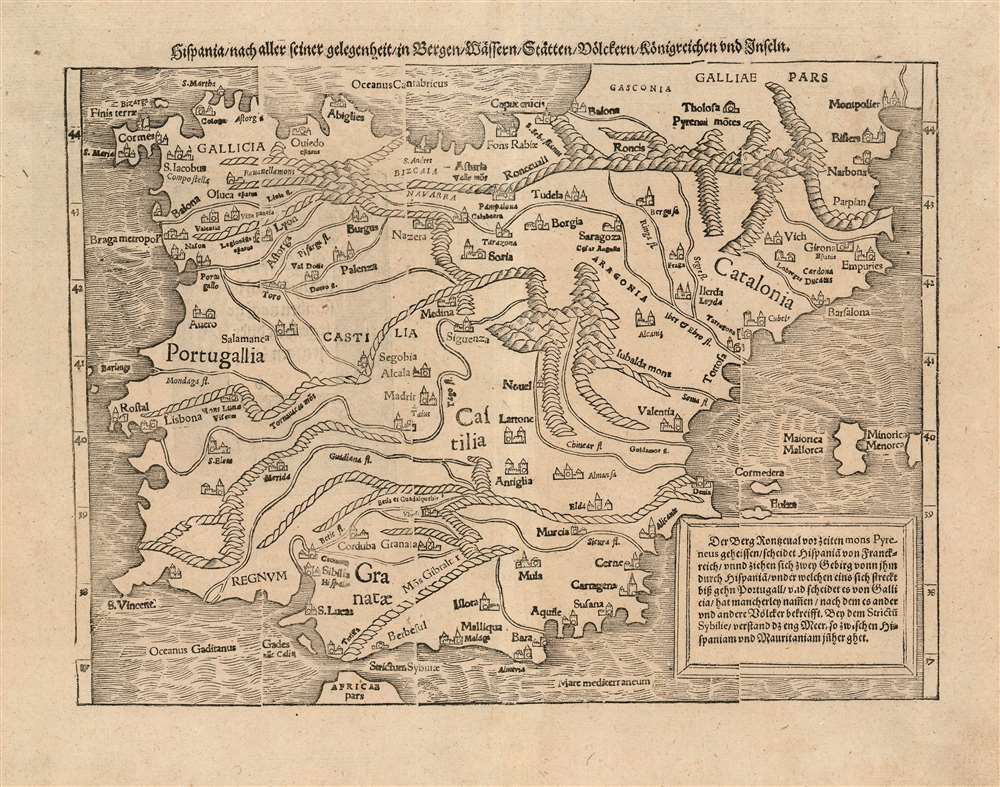 Edition of one of the earliest modern maps of Spain and Portugal.
$500.00

This is Sebastian Munster's 1540 map of Spain and Portugal, from a German edition of Munster's Cosmographia Universalis, probably 1578. The mountains and rivers of the Iberian Peninsula are shown pictorially, as are the many cities shown: among these are Lisbon, Cadiz, Madrid, Cartagena, and Barcelona; a portion of France beyond the Pyrenees is shown as well, with Montpelier noted among the cities there. The map is a somewhat simplified and clarified iteration of Waldseemüller's 1513 Tabula Moderna et Nova Hispanie; both of these maps are distinct from earlier printed maps of the Iberian Peninsula in that the toponymy - that is to say, the naming of places - is based here on contemporary knowledge rather than the work of the second-century geographer Claudius Ptolemy. Until 1513, the only printed maps of the region reflected the geographical knowledge of Imperial Rome: following the rediscovery of Ptolemy's work in the 15th century, geographers strove to update the maps with recognizable names for the cities, rivers, mountains and kingdoms. That effort is reflected here.

This map was introduced in the first 1540 edition of Munster's Geographia. It remained in each edition of that work, and was included in all editions of Munster's Cosmographia until 1578, after which point the double-page maps of the long-lived work were replaced and updated. This map, despite a multitude of states, was printed with only one block, which is astonishing, as the woodblock for this map was, from its creation, plagued with cracks. The first of these can just be discerned in the very first issue of Geographia and all three are evident as early as 1545. Our scrutiny of dateable examples suggests that before the 1560s the woodblock was in no fewer than four parts, with the areas between cracks showing different levels of boldness in strike. The condition of the block, too, appears to have exacerbated the usual variation in the body text of the map - to the extent that virtually every edition of the map incurred state changes, and even within the same edition we see variations in the state of the map. The typographical variations on this example do not correspond to any other state we have seen, but the evidence of the cracks suggests to us a late issue. The decorative engraving used on the verso appears to be unique, on this map, to the 1578 German edition of the map and so we are content to categorize this example as a variant of that edition. While this map is only catalogued separately as a map seven times in OCLC, German editions of Cosmographia are well represented in institutional collections. Various editions of this map appear on the market from time to time in wildly varied condition.

Münster, Sebastian: Cosmographey, oder Beschreibung aller Länder... Basel, 1578     The Cosmographia Universalis, one of the greatest geographical and historical works of the 16th century, 'taught nearly three generations of laymen most of what they knew about the world beyond their native places' (Strauss). Filled with maps, views, and rich descriptions of places throughout Europe and beyond, it was the best general source of geographical information until the advent of Ortelius' Theatrum. It was first issued by Sebastian Munster (1488 - 1552) in its 1544 German edition, and stayed in print long after its author's death in thirty five editions, and in five languages. (Of these, the 1550 and 1552 editions are widely regarded as the most complete and truest to the author's intentions: thereafter, later editors continued to add to the work's text; editions from 1588 onwards employed an entirely different set of maps produced on Ortelius' model.) Munster's goal, initially, was to rally his homeland's humanists and scholars to produce a new map of Germany in order to 'see what kind of a land our ancestors conquered for their home... bring honor to our country and place its beauties in the clear light of day.' Munster's project quickly expanded to cover the known world in its scope to produce a 'sufficiently large volume, in which I touch upon the foundation of all nations and kingdoms, their peculiarities, rivers, mountains, customs of men, royal successions, origins of the more important cities, succinct histories, religions, characteristics and fertility of lands... in Germany, however, I tarry a little longer.'.