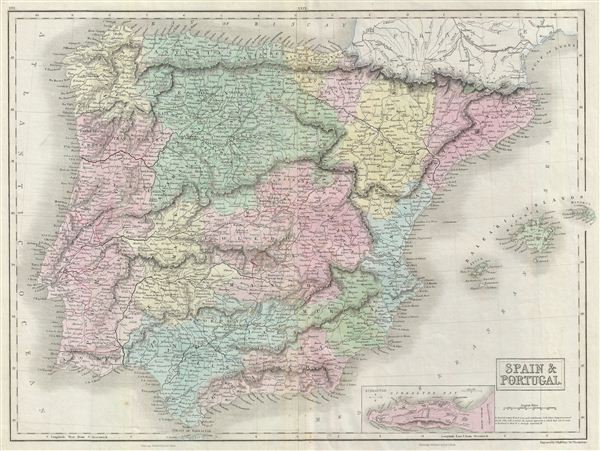 A fine example of Adam and Charles Black's 1851 map of Spain and Portugal. The map covers all of Spain and Portugal from the Pyrenees to the Strait of Gibraltar and includes the Balearic Islands of Ibiza, Majorca, and Minorca. The lower right quadrant features an inset map of Gibraltar. As this map was printed liberal sentiments within Spain were gaining popularity. This eventually led to the Progressive Biennium, in which the Progressive Party tried to replace the conservative liberalism of the Moderate Party with more radical liberalism. Throughout, the map identifies various cities, towns, rivers, lakes, roadways and an assortment of additional topographical details. Map is hand colored in pink, green, blue and yellow pastels to define political and territorial boundaries. The map is engraved by S. Hall and issued as plate no. 30 in Black's General Atlas.