1835 Bradford Map of Spain and Portugal 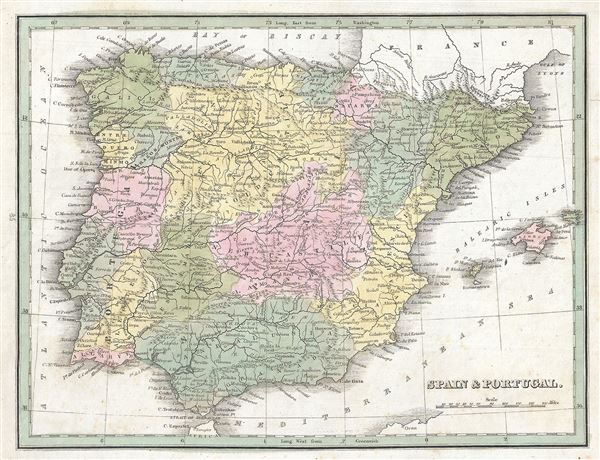 1835 Bradford Map of Spain and Portugal

This is an appealing 1835 map of Spain and Portugal by the important American mapmaker T. G. Bradford. It covers the entirety of Iberia including the Balearic Islands of Minorca, Majorca, and Ibiza. Both countries are covered in full, with Spain divided into its various semi-autonomous provinces. The Strait of Gibraltar is also noted along with Tangier in Africa. Towns, rivers, mountains, capes, and various other important topographical details are noted. Elevation throughout is rendered by hachure and political and regional territories are color coded.

As this map was issued, Spain was in the midst of the First Carlist War. The death of Ferdinand VII saw his daughter, Isabella II, an infant at the time, proclaimed Queen with his wife, Maria Cristina, regent. Infante Carlos, Ferdinand's brother disputed Isabella's claim to the throne. This would eventually result in a civil war from 1833-1839. Meanwhile, in Portugal this map shortly follows the War of the Two Brothers. In 1826, Peter IV of Portugal abdicated his throne in favor of his seven year old daughter Maria da Gloria, on the condition that she marry her uncle (Peter's brother) Miguel. Miguel deposed Maria and proclaimed himself king, leading to the Liberal Wars, and eventually in Miguel being forced to abdicate and go into exile. Maria da Gloria was proclaimed queen in 1834 and resumed her reign as Maria II of Portugal.

This map was published as plate no. 85 in Thomas G. Bradford's 1835 Comprehensive Atlas Geographical, Historical and Commercial.  Bradford's atlas, published in 1835 was an important work on many levels.  First, it was one of the first American atlases to follow an encyclopedic format, offering readers extensive geographical and statistical tables to supplement the maps themselves.  Second, it was published in Boston and influenced the city's rise as a publishing center later in the 19th century (at the time most publishing in the United States was restricted to New York and Philadelphia).  Third, this atlas was the first to contain a separate and specific map showing the Republic of Texas.  Fourth and finally, Bradford's atlas in some instances broke the Euro-centric mold regarding atlas production.  Among other things, Bradford focused his atlas on the Americas and abandoned the classical decoration common in European atlases in favor of a more informational and inherently American approach.