1856 Colton Map of Spain and Portugal 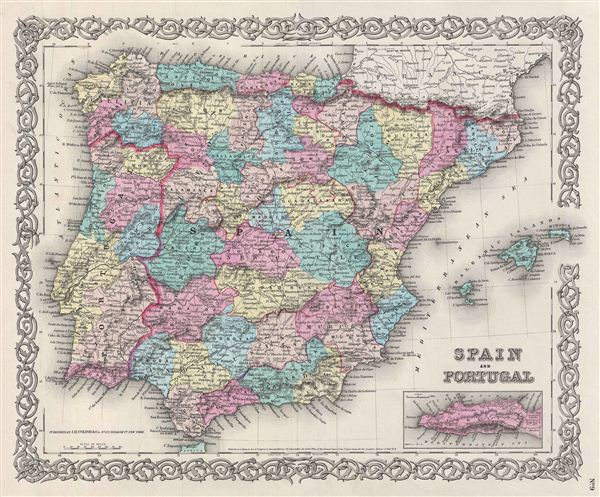 1856 Colton Map of Spain and Portugal

A beautiful 1855 first edition example of Colton's map of Spain and Portugal. Like most of Colton's europe maps, this map was derived from an earlier wall map of the World produced by Colton and D. Griffing Johnson. The map covers all of Spain and Portugal from France to the Strait of Gibraltar and includes the Balearic Islands of Ibiza, Majorca, and Minorca. Lower right hand quadrant has an inset map of Gibraltar. As this map was being drafted, liberal sentiments within Spain were gaining momentum, leading to the Progressive Biennium, in which the Progressive Party tried to replace the conservative liberalism of the Moderate Party and advocated radical liberalism. This map also identifies various cities, towns, forts, rivers, rapids, mountain passes, fords, and an assortment of additional topographical details. Map is hand colored in pink, green, yellow and blue pastels to define national and regional boundaries. Surrounded by Colton's typical spiral motif border. Dated and copyrighted to J. H. Colton, 1855. Published from Colton's 172 William Street Office in New York City. Issued as page no. 9 in volume 2 of Colton's 1856 Atlas of the World.