1783 Janvier Map of Spain and Portugal 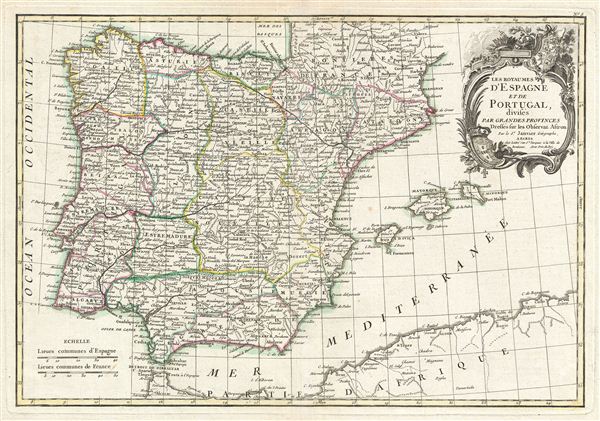 1783 Janvier Map of Spain and Portugal

A beautiful example of Jean Janvier's 1783 decorative map of Spain and Portugal. Janvier's map covers the Iberian Peninsula as well as adjacent parts of France and Africa. The map prominently displays the Balearic Islands of Majorca, Minorca, and Ibiza.

Spain at this time was under the rule of Charles III (1759-1788), a classic enlightened despot whose reforms ushered in a sustained period of Iberian prosperity. Unfortunately, the reforms of Charles III were overturned during the reign of his mentally handicapped son, Charles IV (1788 to abdication in 1808). Dominated by his wife's lover, Manuel de Godoy, Charles IV embarked on policies that regressed Spain to its pre-Charles III state. Spain was ultimately cajoled into an uneasy alliance with France and was consequently blockaded by the British. Charles IV's vacillation, culminating in his failure to honor the alliance by neglecting to enforce the Continental System, led to Napoleon's 1808 invasion of Spain and triggered the Spanish War of Independence.

A large decorative title cartouche of a rococo ethic appears in the upper right quadrant. Drawn by J. Janvier c. 1781 for issue as plate no. 8 in Jean Lattre's 1783 issue of the Atlas Moderne.