1828 Malte-Brun Map of Spain and Portugal 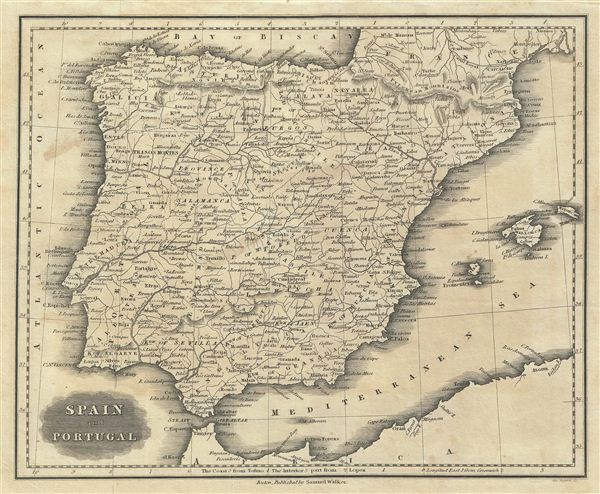 1828 Malte-Brun Map of Spain and Portugal

This is an attractive example of the 1828 Malte-Brun map of Spain and Portugal. The map covers the Iberian Peninsula from the Bay of Biscay in the north to the Strait of Gibraltar in the south and from the Atlantic Ocean to Catalonia in the east. The Balearic Islands of Minorca, Majorca, and Ibiza and the southern part of France are also included. The Pyrenees Mountains, the natural boundary between Spain and France, are also identified. During this period, Portugal was on the cusp of the War of the Two Brothers. In 1826, Peter IV of Portugal abdicated his thrown in favor of his seven year old daughter Maria da Gloria, on the condition that she marry her uncle (Peter's brother) Miguel. Miguel deposed Maria and proclaimed himself King, which led to the Liberal Wars, eventually resulting in Miguel being forced to abdicate and go into exile, and Maria II being proclaimed Queen. During this same period, in Spain, the death of Ferdinand VII also saw his daughter, Isabella II, an infant at the time, proclaimed Queen. These events set the stage fo the First Carlist War in Spain from 1833-1839. Various, important rivers, cities and other topographical details are noted. This map was published by Samuel Walker in 1828 as part of the American edition of Conrad Malte-Brun's System of Geography, Vol. I.