1854 Spruner Map of Spain and Portugal with ecclesiastical divisions 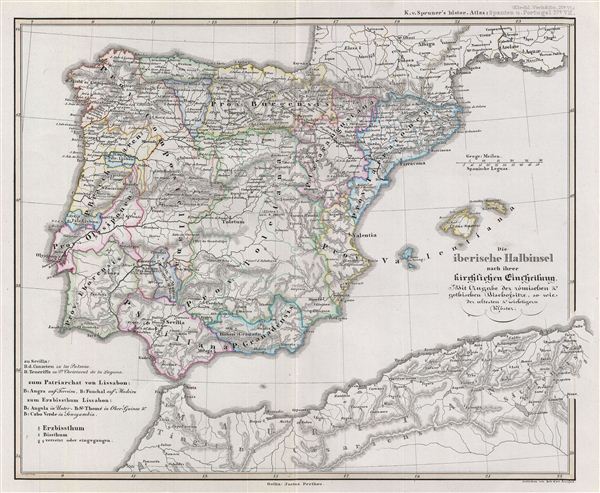 1854 Spruner Map of Spain and Portugal with ecclesiastical divisions

This is Karl von Spruner's 1854 map of the Iberian Peninsula (Spain and Portugal) illustratingits ecclesiastical divisions. The map covers all of Spain and Portugal from France to the Mediterranean Sea. It also includes the Balearic Islands and shows part of Algeria. Shows locations of various dioceses. The whole is rendered in finely engraved detail exhibiting throughout the fine craftsmanship of the Perthes firm. Prepared by Karl Spruner for publication as plate S VII in the second edition of Justus Perthes' 1854 Historich-Geographischer, Hand-Atlas zur Geschichte der Staaten europa's vom Anfang des Mittelalters bis auf die Neueste Zeit.