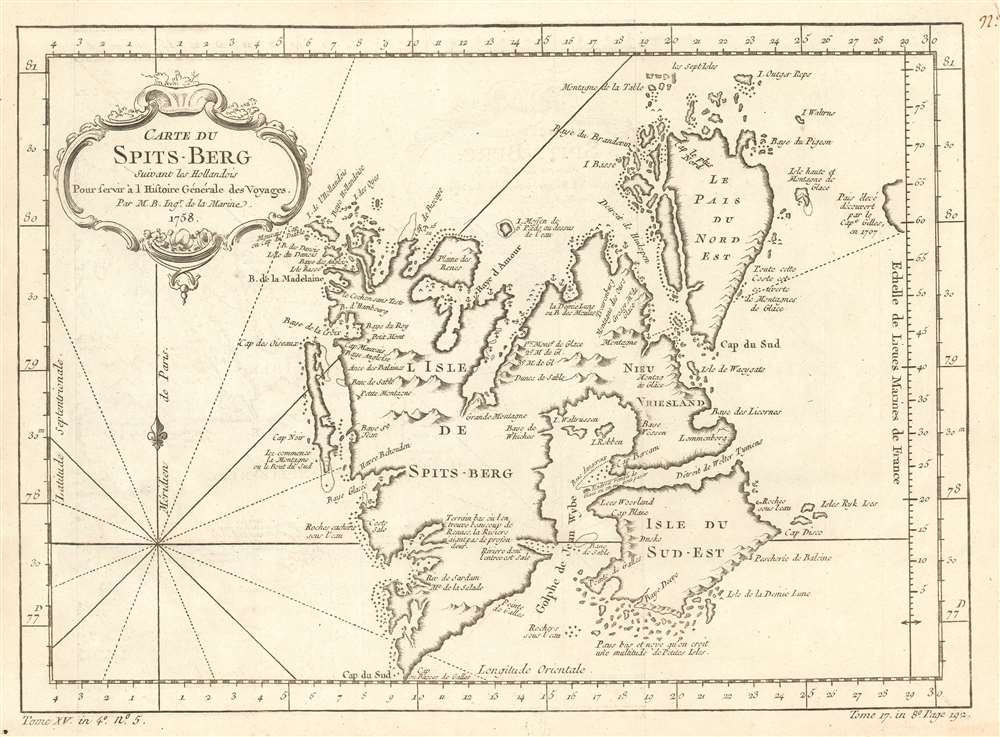 This is a 1758 Jacques-Nicolas Bellin map of Spitsbergen in the Svalbard Archipelago of Norway. The many islands of the arctic archipelago, as well as their bays, capes, and coastal navigation hazards, including submerged rocks, are noted. Safe harbors are marked by anchors. The map also features interesting annotations, such as thie, 'This entire coast is covered in mountains of ice (Toute cette coste est couverte de Mantagnes de Glace)'.

Dutch explorer Willem Barentz first discovered Svalbard in 1596, and the first recorded landing on the island happened in 1604. During the early 17th century, whalers established the first settlements in the archipelago, and by the early 1630s, the most hearty would winter on the islands. Russian hunters arrived in the late 17th century and set up relatively permanent settlements. Nonetheless, by the 1860s the islands were again largely uninhabited. Svalbard became a destination for Arctic tourism in the 1890s. Today, Svalbard's three principal industries are mining, tourism, and research. It is also home to the Svalbard Global Seed Vault.

This map was created by Jacques-Nicolas Bellin and for publication in Abbé Prévost's Histoire général des voyages in 1758. The OCLC catalogs two examples which are part of the collections at the Bibliothèque de l'Université Laval and the Universitatsbibliothek Bern.