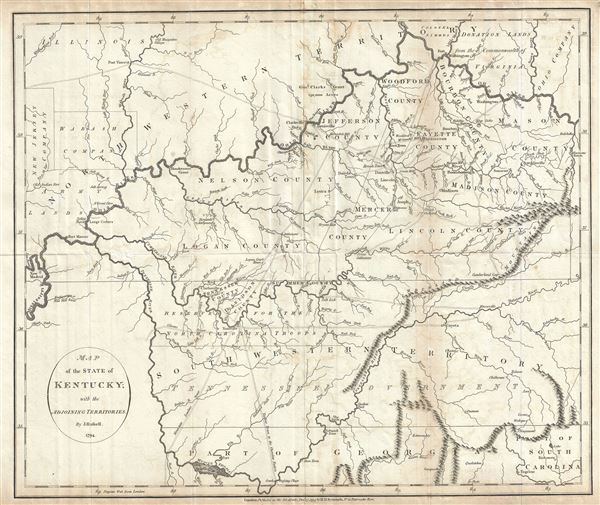 This is an unusual and scarce 1794 map of Kentucky by John Russell. This early map covers all of Kentucky, the northern parts of Georgia, most of Tennessee (here called South Western Territory) and parts of Georgia, Indiana and Ohio (North Western Territory). The towns of Lexington, Louisville, Nashville, Knoxville, etc. are noted. Identifies Leestown, which was the first Anglo-American settlement on the north side of the Kentucky River and is now part of Frankfort. Pioneer roads, called traces, are also identified throughout. The land grants of the New Jersey Companies, Wabash Company, the General Clark's grant, the Ohio Company and Colonel Simmens in the surrounding territories are noted.

This map, issued soon after Kentucky was given statehood and before Tennessee became a state, shows delineated counties within Kentucky. The map was published by H. D. Symonds in William Winterbotham's An historical, geographical, commercial and philosophical view of the American United States, one of the first atlases published after the American Revolutionary War that recognized the United States.