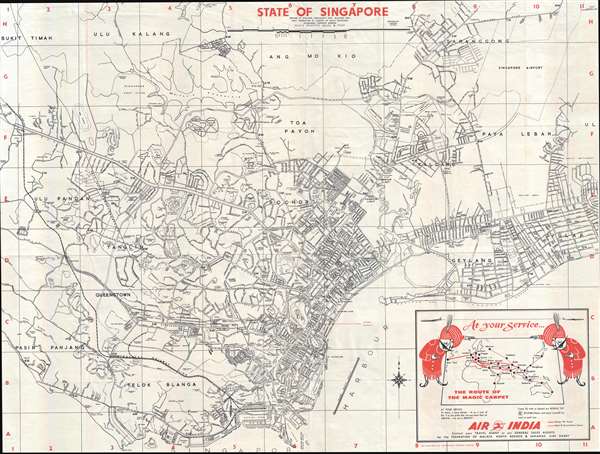 A scarce promotional map of Singapore city issued by Tien Wah Press for Air India. Centered on the Downton Core, the map extends from Pasir to Siglar and as far north as Saranggong. IN the bottom right there is a charming advertisement illustrating Air India routes throughout Asia, Europe, and to New York.

While the map is undated the content suggests that it must postdate 1962, when Indian Airlines changed its name to Air India. The National Library Board assigns it to 1975, with some reservations, and we have folded their dating. This map is scarce with the OCLC citing only 2 examples, one at the Singapore National Library Board and another at the University of Syracuse.

Tien Wah Press (1939 – present) is a Singapore printing concern founded in 1939. It is not a major printing concern with thousands of employees around the world. The company is still in operation today as a subsidiary of Dai Nippon Printing Co. Ltd. with offices in Singapore, Australia, Europe, the United Kingdom, and the United States. Learn More...