1811 Russell Map of the United States 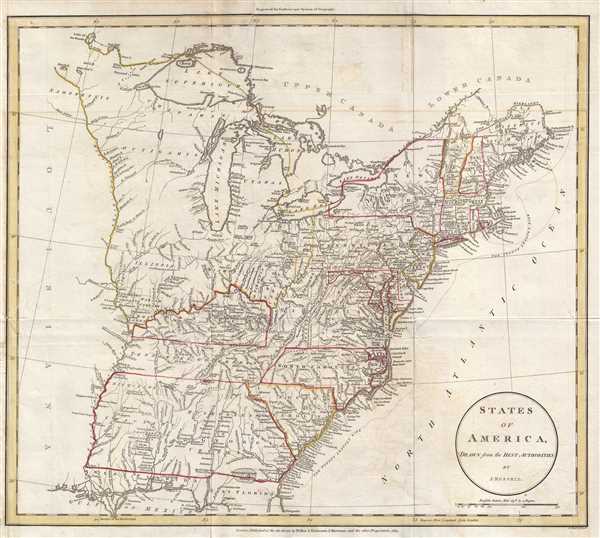 1811 Russell Map of the United States

This is an 1811 John Russell map of the United States illustrating numerous land grants in the newly acquired lands west of the Appalachian Mountains. The map depicts the United States from the Mississippi River to the Atlantic Ocean and from Lake Superior and Canada to the Gulf of Mexico. A relatively early map of the United States, both state and territorial borders lack certainty. Several borders, such as Virginia's, Georgia's and Pennsylvania's western borders, are not clearly defined. The level of detail present throughout the map is nonetheless impressive, with rivers, lakes, forts, posts, and Native American villages noted throughout.

Ohio Company land in labeled in the Ohio Territory, as well as the Army lands, the Seven Ranges, and the land donated by the Commonwealth of Virginia. The Ohio Company was a land company which purchased their lands from the federal government and was responsible for founding the first permanent United States settlement in the Northwest Territory at Marietta, along the Ohio River. The Seven Ranges, also known as the Old Seven Ranges, was the first tract of land to be surveyed in what became the Public Land Survey System. The tract is 42 miles across the northern edge, 91 miles on the western edge, with the south and east sides along the Ohio River. The Virginia Military District (labeled here as 'Donation Lands from the Commonwealth of Virginia') was land granted to Virginia after it ceded its claims in the region to the federal government to aid passage of the Articles of Confederation. This land was then used as payment for Virginia veterans of the American Revolutionary War.

Illinois Company, New Jersey Company, and Wabash Company land grants are labeled along the Mississippi River in Illinois. The Illinois-Wabash Company was formed in 1779 after the merger of the Illinois Company and the Wabash Company. The two companies had been established in 1773 and 1775, respectively, to purchase land from Native American in the Illinois Country, which had recently been acquired by Great Britain in 1763. Each company purchased two large tracts of land. Since the Royal Proclamation of 1763 forbade the private purchase of Native American lands, Great Britain refused to recognize the acquisitions. After the American Revolutionary War, the now merged Illinois-Wabash Company appealed to both Virginia (who claimed the Illinois Territory) and the Federal government to recognize the purchases. These attempts proved unsuccessful. The United States eventually purchased the land in question from the Native Americans and resold it, the dispute eventually found its way to the U.S. Supreme Court, in the case Johnson v. M'Intosh in 1823. The Court ruled that the United States government, following British precedent, would not recognize private purchases of native lands, and thus the claims of the Illinois-Wabash Company were invalid.

Numerous Native American tribes are labeled, along with forts and other locations in the frontier lands. In the region of the United States now occupied by Georgia, Alabama, and Mississippi, several different tribes are noted, along with their villages. The detail is incredible. The geography of this region would change drastically in the coming decades, following the forced deportation of these Native American tribes to the Indian Territory. The unlabeled expanse of the Louisiana Territory occupies the left border portion. All five Great Lakes are illustrated and labeled.