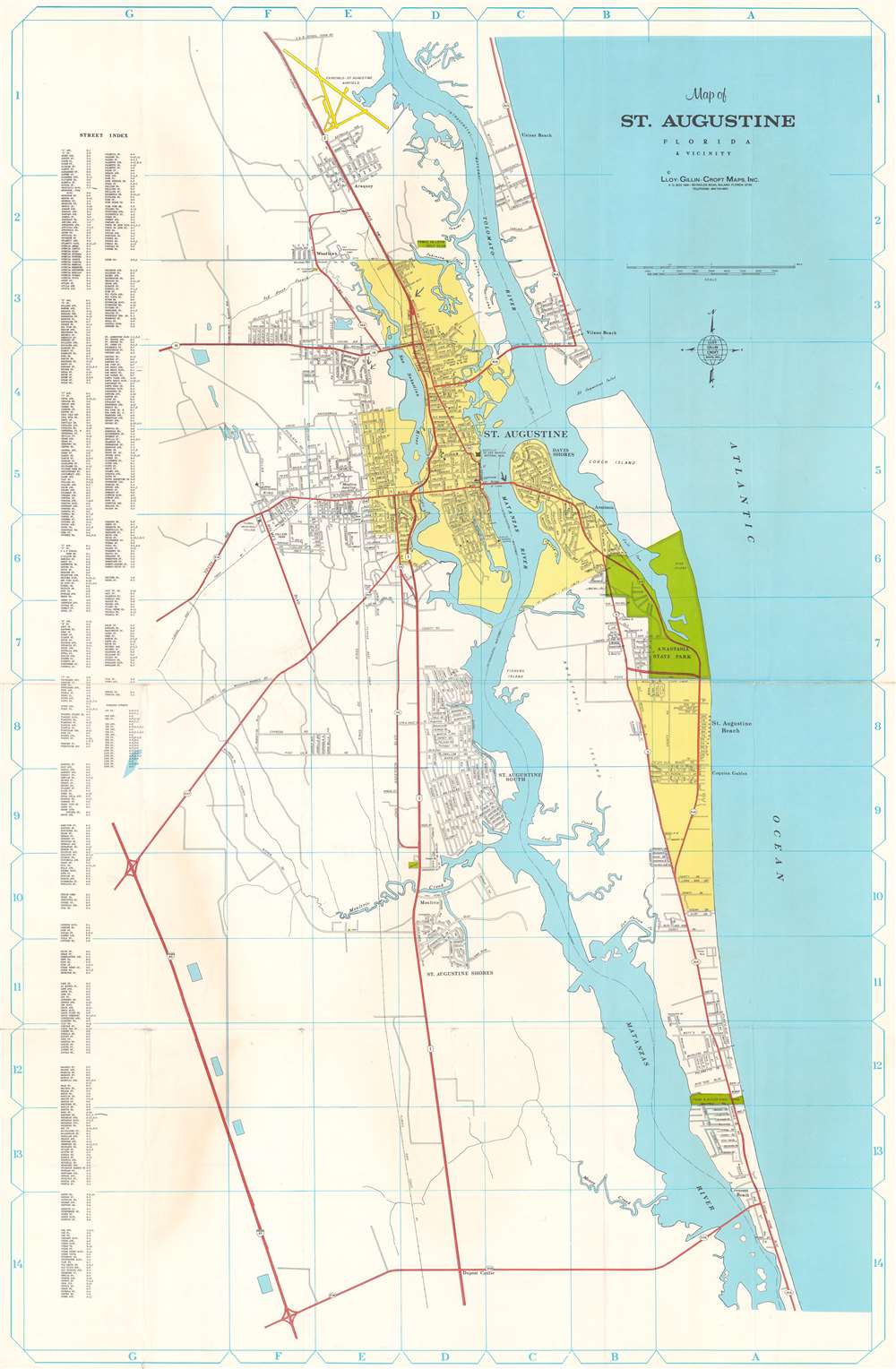 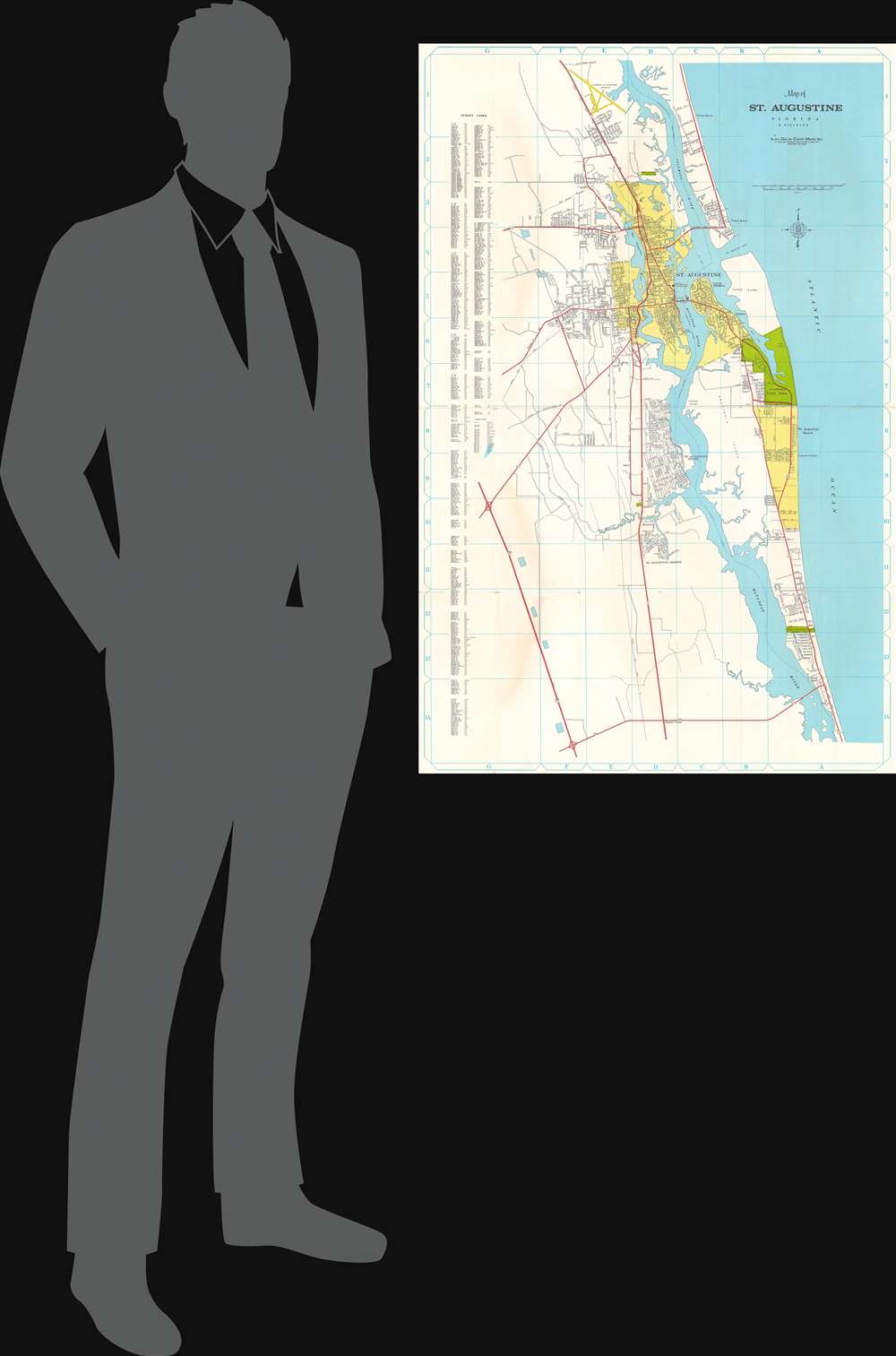 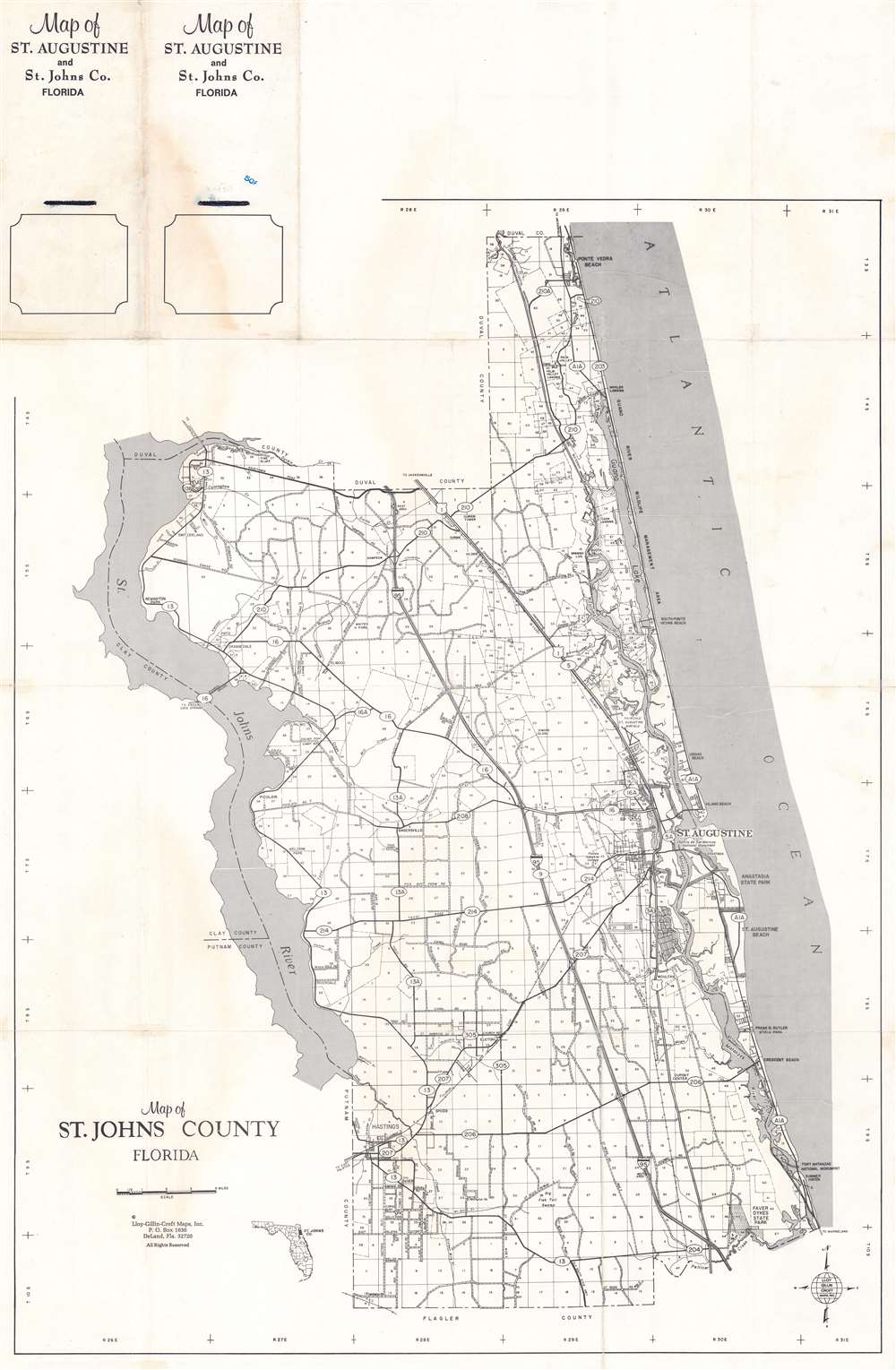 The oldest city in America.

This is a 1972 Lloy - Gillin - Croft Maps city plan or map of St. Augustine, Florida. Coverage extends from Fairchild - St. Augustine Airfield south along the coast to Dupont Center. Streets throughout are illustrated and major highways, including U.S. Highway 1, are highlighted in red. The area within St Augustine's city limits is shaded yellow, as are the city limits of St. Augustine Beach, slightly to the south of the city. Anastasia State Park is shown between St. Augustine and St. Augustine Beach. Only a handful of buildings are illustrated, but these include the courthouse, Flagler Memorial Hospital, and the Castillo de San Marcos National Monument. The Florida East Coast Railway is illustrated as well. A street index is included along the left border.

A map of St. Johns County is printed on the verso. Bounded by the St. John's River on the west and the Atlantic Ocean on the east, the county is divided into townships and cities, towns, and villages are identified.

This map was created and published by Lloy - Gillin - Croft Maps, Inc. in 1972. We note an example at the Library of Congress, but the map is otherwise uncatalogued.

James Ferrell Croft (February 27, 1942 - August 21, 2008) was a professional cartographer. Born in McAlpin, Florida, Croft was an incredibly popular personality in Levy County, Florida, at the time of his death. He enjoyed boasting that he 'had a million friends'. Croft will also be remembered as a master cartographer with a keen memory for detail. He started his career in cartography at J.M. Smedly Publisher in Deland, Florida, where he did map drafting, blueprints, and map advertising layout, from May 1, 1965 until December 1, 1970. He then worked for Real Estate Directories, Inc. as the supervisor of mapping and the Deland office office manager. He was vice president, cartographer, and production manager for Lloy-Gillin-Croft Maps, Inc. from January 15, 1972 through March 1, 1975. Then, he opened Croft Land Surveying with his brother Daniel M. Croft, which operated from May 15, 1975 until January 15, 1987. The bulk of his career, however, was spent as the cartographer for the Levy County Property Appraiser's Office, where he spent thirty and a half years. He worked for Levy County until he retired. Croft died unexpectedly after a short illness not long after he retired from the county property appraiser's office. Learn More...


Patrick Henry Gillin (October 20, 1923 - January 4, 2008) was one of the founding members of the Lloy-Gillin-Croft Map Company in Daytona Beach, Florida. The business operated from January 15, 1972 until March 1, 1975. Gillin was married and divorced at least twice over the course of his life. Learn More...