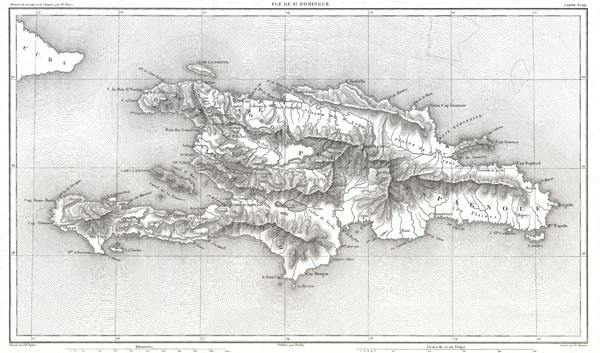 A beautifully engraved map of the West Indies island of Hispaniola or Santo Domingo by the French cartographer August Henri Dufour. Covers the entire island in striking topographical detail. Identifies towns, cities, rivers, lakes, mountains, and various undersea shoals and reefs. Names Mont Cibao, in the central part of the island, where Columbus famously failed to find rich gold mines. Today this island is divided between the Dominican Republic and Haiti. Drawn by A. H. Dufour and engraved by Charles Dyonnet for issue as map no. 22 in M. A. Thiers' History of the Consulate and the Empire of France Under Napoleon, 1859.

Thiers, M. A., History of the Consulate and the Empire of France Under Napoleon, 1859.