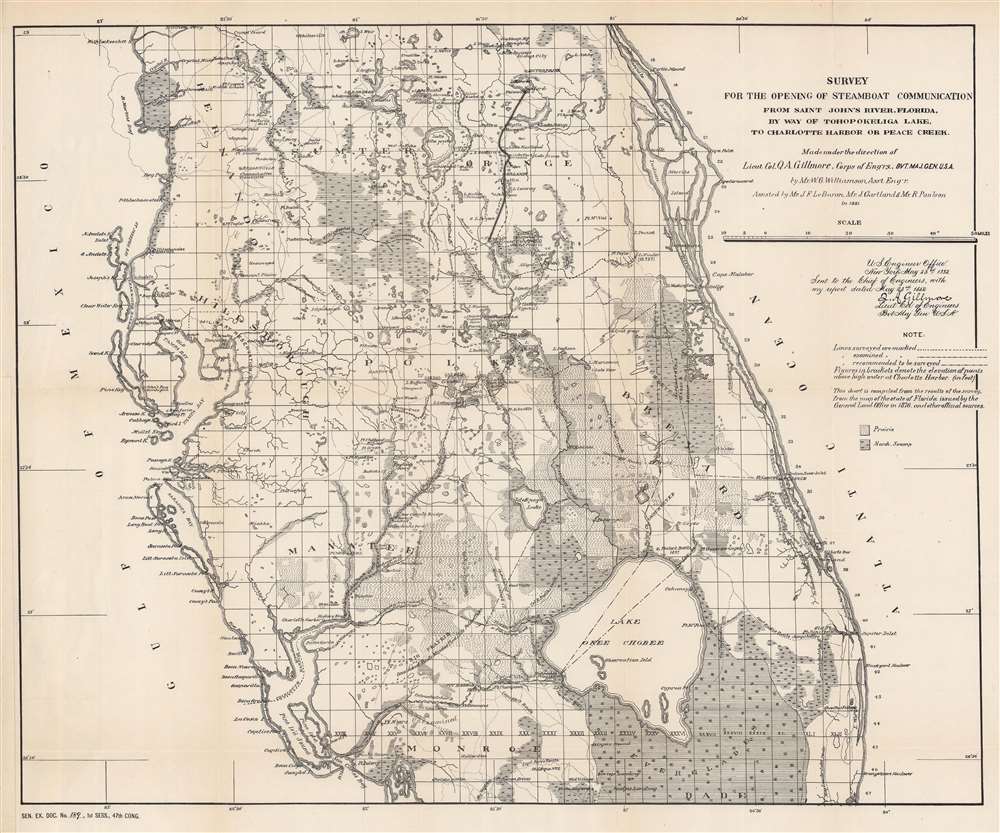 This is an 1882 W. G. Williamson map of central Florida canal surveys. After the American Civil War (1861 - 1865), as the population of Florida increased, demand for navigable inland waterways to transport goods and people rose. The present map was part of this phenomenon. Dashed lines illustrate canal surveys from the St. Johns River (near Merrits Island on the east coast) to Charlotte Harbor (on the west coast). These surveyed routes traversed Lake Tohopokeliga and connected Orlando, the South Florida Railroad, Lake Kissimmee, Fort Meade, and several other lakes with Florida's Gulf Coast at Charlotte Harbor. Other possible routes are marked, along with routes that were recommended to be surveyed.

This map was created by W. G. Williamson, J. Francis Le Baron, J. Gartland and R. Paulson under the direction of Quincy Adams Gillmore for the U.S. Army Corps of Engineers and published in Senate Documents for the 47th United States Congress in 1882. We note a single cataloged example, located at the University of South Florida.

Quincy Adams Gillmore (February 28, 1825 - April 7, 1888) was an American army officer, engineer, and Union general during the American Civil War. Born at Black River, Ohio, Gillmore graduated at the top of his class from the United States Military Academy at West Point in 1849. Upon graduation, Gillmore was commissioned as a second lieutenant in the Army Corps of Engineers. During these early years he helped plan the fortifications of Hampton Roads, Virginia. He returned to West Point in 1852 to teach practical military engineering. He was transferred to New York City in 1856 and became the army's chief engineer in the region. When the American Civil War started, Gillmore ended up on General Thomas W. Sherman's staff, and accompanied him on the Port Royal expedition in 1861. In 1862, Gillmore (who had been promoted to brigadier general) was in command of the siege of Fort Pulaski. During this siege and ensuing battle, Gillmore became the first military officer to effectively use the new naval rifled artillery to destroy and enemy stone fortification. His actions at Fort Pulaski earned Gillmore national attention. Gillmore served in various capacities throughout the rest of the American Civil War, including as commander of the Department of the South from June 12, 1863, until May 1, 1864. Then, as commander of the X Corps, Gillmore and his corps were transferred to the Army of the James in Virginia, where they participated in the Bermuda Hundred campaign. Gillmore feuded with his commander, Benjamin Butler, over the Union defeat, which led him to be transferred to Washington, D.C. While in D.C., Gillmore commanded the defense of the city against 10,000 Confederate soldiers under the command of Jubal A. Early. Gillmore resigned from the Army on December 5, 1865. He returned to New York, where he became a prominent civil engineer. He authored several books. He also played a role in rebuilding the coastal fortifications along the Atlantic coast destroyed during the war. Learn More...