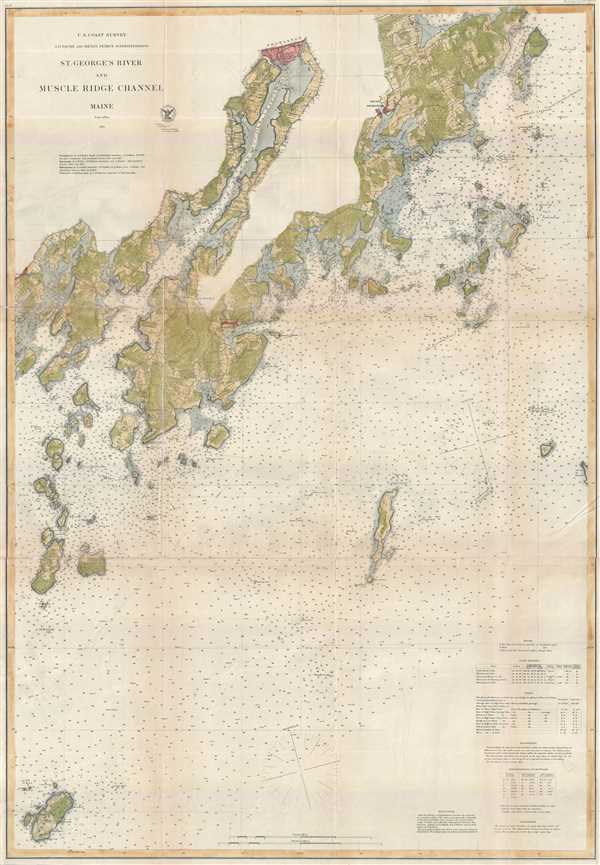 This is an appealing mid-19th century U.S. Coast Survey nautical chart or map of St. Georges River and Muscle Ridge Channel, Maine. The map covers the Maine coastline from Friendship Main eastward to Monroe Island, including Thomaston, South Thomaston, Herring Gut, Tennants Harbor, Harts Neck, and several other small communities. This chart offers some of the Coast Survey's earliest work in this region. The map features countless depth sounding and shading to indicated shoals and other undersea dangers. Sailing instructions and notes pertinent to the mariner appear in the lower right quadrant.

When this map was drawn the region was a center for shipbuilding and nautical commerce. By 1840 there were but seven recorded millionaires in the United States and two were Thomaston ship captains. Later in the 19th century the shipbuilding centers moved to other regions leaving Thomason a quiet and beautiful tourist haven.

The triangulation for this chart was accomplished A. D. Bache, G. A. Fairfield, J. A. Sullivan, e. e. Webber and C. Ferguson. The topography is the work of F. W. Corr, W. H. Dennis, and C. Hosmer. The hydrography was completed by a party under the command of e. Cordell, F. P. Webber, R. e. Halter and C. Junken. The whole was compiled under the supervision of A. D. Bache, one of the most influential and prolific figures in the early history of the U.S. Coast Survey.

Bache, A. D., Report of the Superintendent of the United States Coast Survey, Washington, 1873.

Very good. Backed with archival tissue for stability. Minor toning along folds, some repaired splits.
Looking for a high-resolution scan of this?