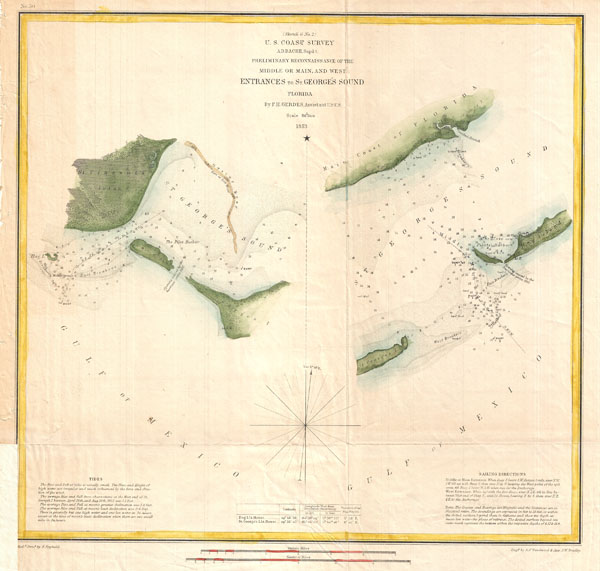 A very nice example of the U.S. Coast Survey's 1853 chart or map of the entrances to St. George Sound, Florida. Essentially two maps in one. The left map depicts the western Entrance to the sound between St. Vincent's Island and Georges Island. The right hand map shows the Main entrance to the sound between St. Georges Island and Hog Island. Notes opening in the barrier islands created during the Hurricane of 1852, which struck the Florida coast with exceptional violence. Indeed, since this map was issued a number of violent hurricanes and other natural disasters have reshaped the topography of this region significantly. Detailed sailing instruction and notes on undersea dangers, times, and bearings in the lower quadrants. Prepared under the supervision of A. D. Bache by H. Gerdes, the Coast Survey's resident Gulf expert. Published in the 1853 edition of the Superintendent's Report

Report of the Superintendent of the United States Coast Survey, (Washington) 1853.