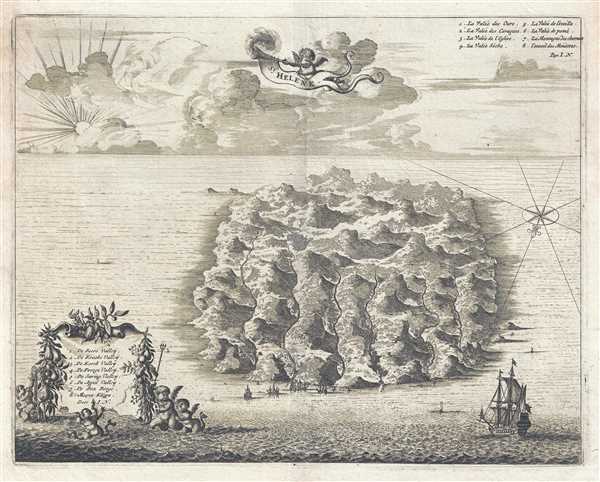 This is a 1686 Olfert Dapper view of St. Helena. The view depicts the entirety of the island, illustrating its topography and rivers. Eight locations are numerically identified, with an index in Dutch in the lower left corner, and a French index in the upper right. Six of the eight identified locations correspond to valleys most likely associated with the rivers. The Dutch index on the lower left is surrounded by a decorative cartouche. Several ships are illustrated in the Atlantic on their way to and from the island.

St. Helena is an island 2,500 miles east of Rio de Janeiro and 1,210 miles west of the Cunene River, which establishes the border between Namibia and Angola. The island is approximately 10 miles by 5 miles. St. Helena holds the distinction of being one the most remote islands in the world, and was uninhabited when discovered by the Portuguese in 1502. It became an important waypoint for vessels traveling to Europe from Asia and South America and is also famous as a place of exile. Napoleon was exiled there by the British in 1815, and the island served as a prison camp during the Second Boer War. St. Helena also hosted a series of experiments in conservation, reforestation, and the creation of artificial rainfall between 1791 and 1833. These experiments helped establish the beginnings of modern environmentalism.

Very good. Verso reinforcement along left and right margins. Verso repair of small centerfold separation. Blank on verso.
Looking for a high-resolution scan of this?