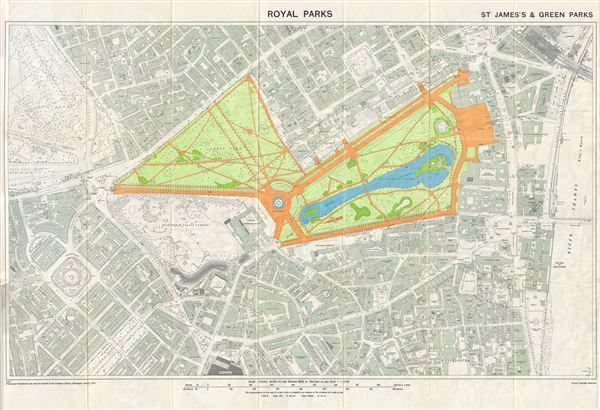 This is a beautiful example of the 1953 Ordnance Survey map of St. James's Park and Green Park, two of the Royal Parks of London, England. It covers the vicinity of the two adjoining parks from Hyde Park to the River Thames, and south as far as Victoria Station. The map is highly detailed with the parks beautifully rendered. Streets, railway stations, churches, important buildings and other topographical details are noted throughout. Buckingham Palace and its Gardens are also identified. The Royal Parks of London, part of the hereditary possessions of the Crown, were originally owned by the monarchy of the United Kingdom and used for recreation and hunting by the royal family. St. James Park is the oldest and one of the largest parks in London today. Originally believed to have been a burial ground for lepers, Green Park connects with St. James's Park at the Queen Victoria Memorial Gardens. This map was printed and published by the Director General of the Ordnance Survey, Chessington, Surrey in 1953 for the Ministry of Works.

Very good. Minor wear along original fold lines. Blank on verso. Folds into original binder.
Looking for a high-resolution scan of this?