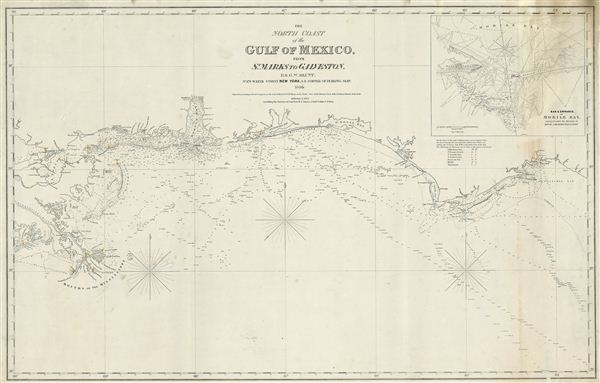 An extremely scarce 1865 nautical chart or maritime map of the Gulf Coast by e and G. W. Blunt. This map, though titled ‘From St. Marks to Galveston' in fact only follows the coast from St. Marks to the Delta of the Mississippi River – suggesting that a companion piece may have been planned for future updates. The Blunts first issued this chart in 1842 with several updated editions following – the present example being the 1865 edition. The map offers excellent coastal detail and countless depth soundings throughout. A detailed inset in the upper right quadrant focuses on the ‘Bar and entrance of Mobile Bay.' A fine and scarce example of this beautiful nautical chart.

Very good. Some warping and minor discolorations.
Looking for a high-resolution scan of this?