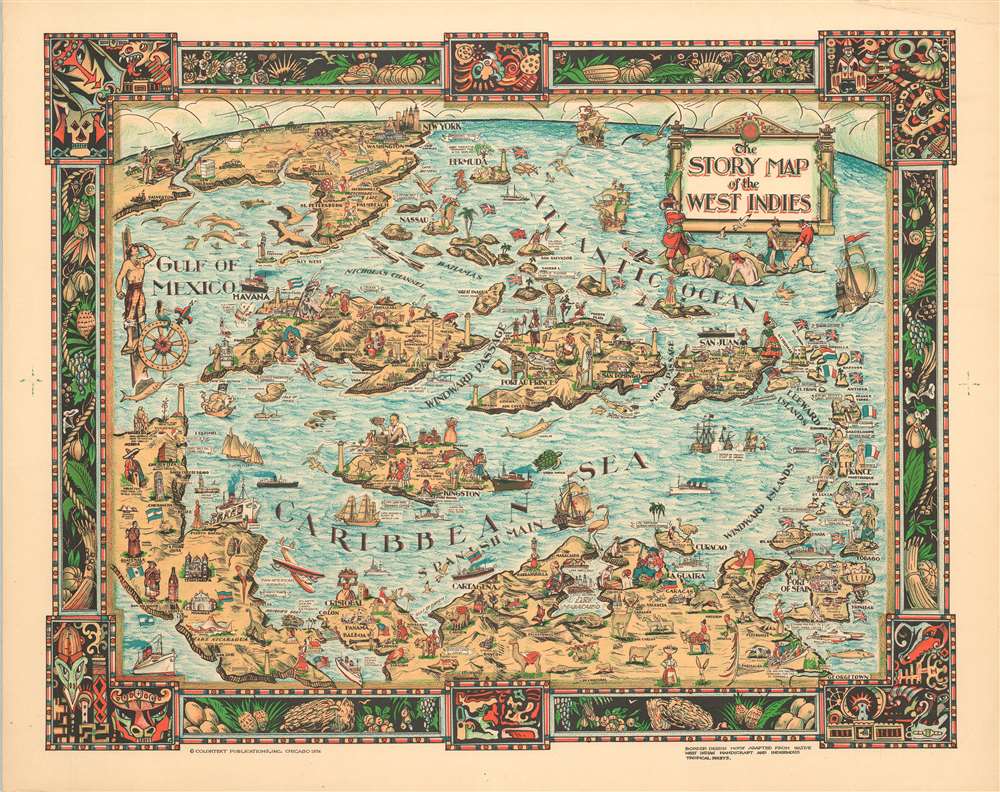 This is a 1936 Colortext pictorial story map of the West Indies. The map depicts the region from Florida and the Gulf of Mexico and the Yucatan Peninsula to the Leeward Islands and Georgetown, Guyana and from New York and Chicago to northern South America. Each island is labeled, along with multiple locations including cities and towns, such as Havana, Port-au-Prince, and San Juan. Flags are used in the Leeward Islands to identify which European country claimed suzerainty. The British Union Jack, for example, appears next to Bermuda and the Bahamas. Numerous vignettes populate the map, including native birds, animals, and fish, pirates and pirate ships, and locals dressed in indigenous costumes. Historical events are also chronicled, such as Ponce de Leon's first settlement on Puerto Rico and the naval battle of Santiago. Cities in the United States are also noted, including New York City (illustrated by its famous skyline), Washington, D.C. (marked by the U.S. Capitol), Detroit, Chicago, and Miami. The whole is surrounded by a decorative border motif derived from indigenous tropical fruits and West Indian handicraft.

This map was published by Colortext Publications, Inc. in 1936. It is part of five different institutional collections and is rare on the market.

Colortext Publications (c. 1933 – 1950) was a Chicago based firm active in the middle part of the 20th century. The firm's earliest work is a series of pamphlets associated with the Chicago Century of Progress International Exposition (1933-1934). Following the exposition Colortext partnered with various artist to create a series of pictorial maps known as 'Story Maps.' The firm partnered with such notable pictorial map artists as Ernest Dudley Chase, Egbert G. Jacobson, Julio de Diego, A. Walker and W.E. Vogelear. Although it is unclear who founded the firm, it is registered business at 8 South Michigan Avenue, Chicago, as early as 1933. In 1938 and 1940, the firm produced to exceptional publications, a panoramic view of Chicago and the Military Panoramap of the Theatre of War. These depart markedly form the 'Story Map' model and reveal a greater level of sophistication than evident in Colortext's earlier publications. Sometime after World War II Colortext was acquired by the Chicago businessman and druggist Paul J. Mandalbach. The firm's last publication was in 1950, a Story Map of the West Indies. Learn More...