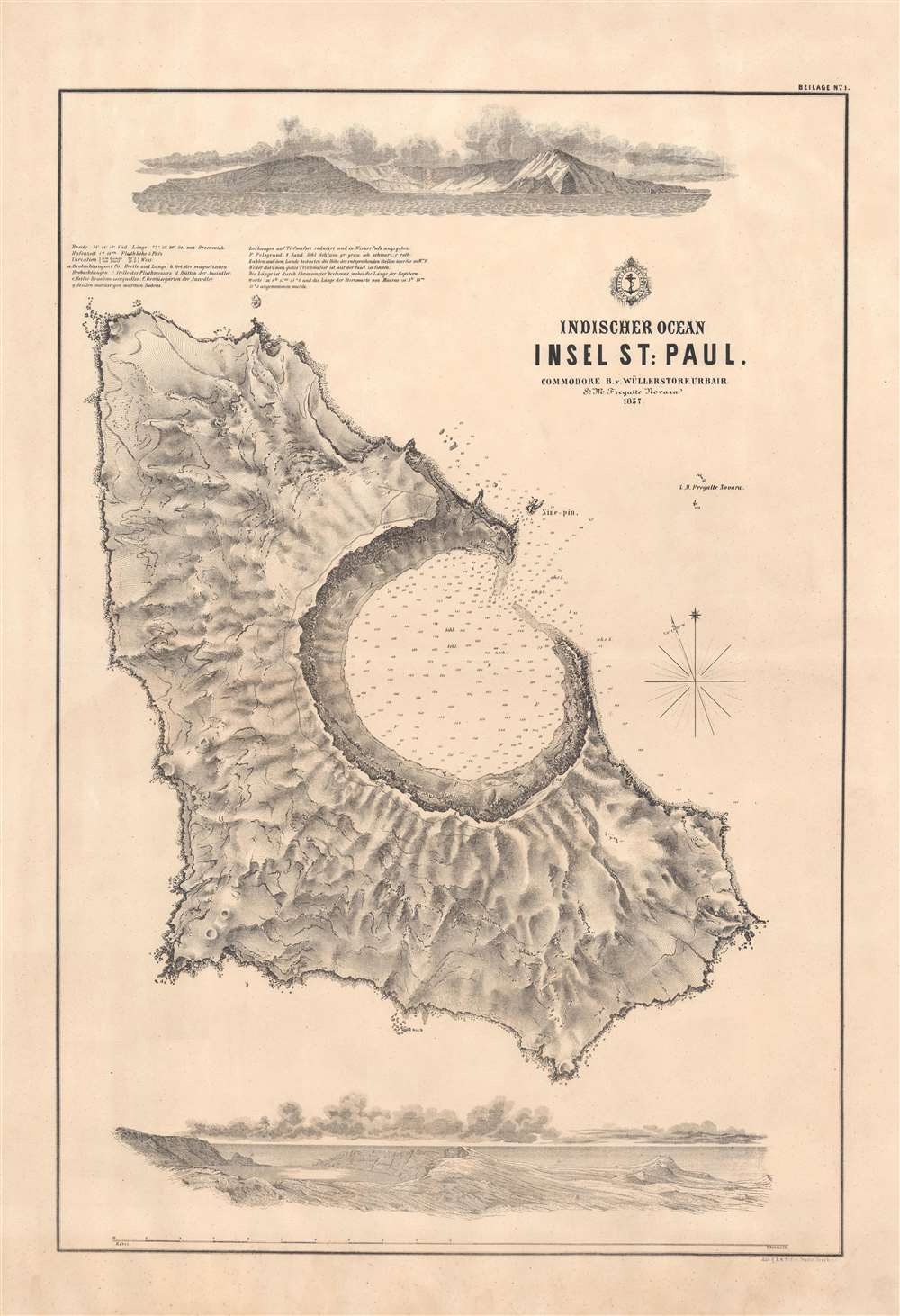 An Antarctic island that is an important bird sanctuary.

This is a rare 1857 Baron Bernhard von Wüllerstorf-Urbair map of St. Paul Island (Île Saint-Paul), a remote island in the extreme southern Indian Ocean, French Southern and Antarctic Lands. Today Île Saint-Paul is an important bird sanctuary. This is one of a series of maps of Indian Ocean islands compiled during the 1857 - 1859 Novara Expedition. The map includes a bird's-eye view of the island at bottom, and another illustration at top showing the island as it would have appeared from the ship. Near the top is a legend, along with latitude, longitude, and a number of other measurements and explanatory notes.

A beautifully-shaped volcanic island, St. Paul's Island sits in the southern Indian Ocean. It is close to the Île Amsterdam, which is the reason that it was claimed by France, initially before the Novara expedition, though only temporarily until the 1890s. Although it had been mapped as early as 1559 by Portuguese mariners, this was the first proper map of the island. It has historically been used to help check bearings, but a number of ships have wrecked on the island, leaving their crews in dire straits (one of the legend notes says that 'neither wood nor good drinking water can be found').

The Austrian Navy frigate Novara under the command of Baron Bernhard von Wüllerstorf-Urbair circumnavigated the globe between April 30, 1857 and August 26, 1859. The ambitious scientific voyage and included several well-known scientists, among them a geologist, an ethnologist, and a zoologist. It had the support of high-level Austrian nobles, officials, and scientists, including Alexander von Humboldt. Many items collected on the voyage were later housed in museums in Vienna, especially the imperial Naturhistorisches Hofmuseum.

This map was printed by the K.K. Hof- und Staatsdruckerei (the Imperial Royal State Printing Office) and is attributed to Baron Bernhard von Wüllerstorf-Urbair. It also carries the seal of the Hydrographische Anstalt (Hydrographic Institute) in Vienna. Although it is dated to 1857 and usually cataloged as such, it likely was printed in 1859, after the voyage's completion. It is held by a number of libraries and universities in Europe and North America but is scarce to the market.

Very good. Some toning and spotting.