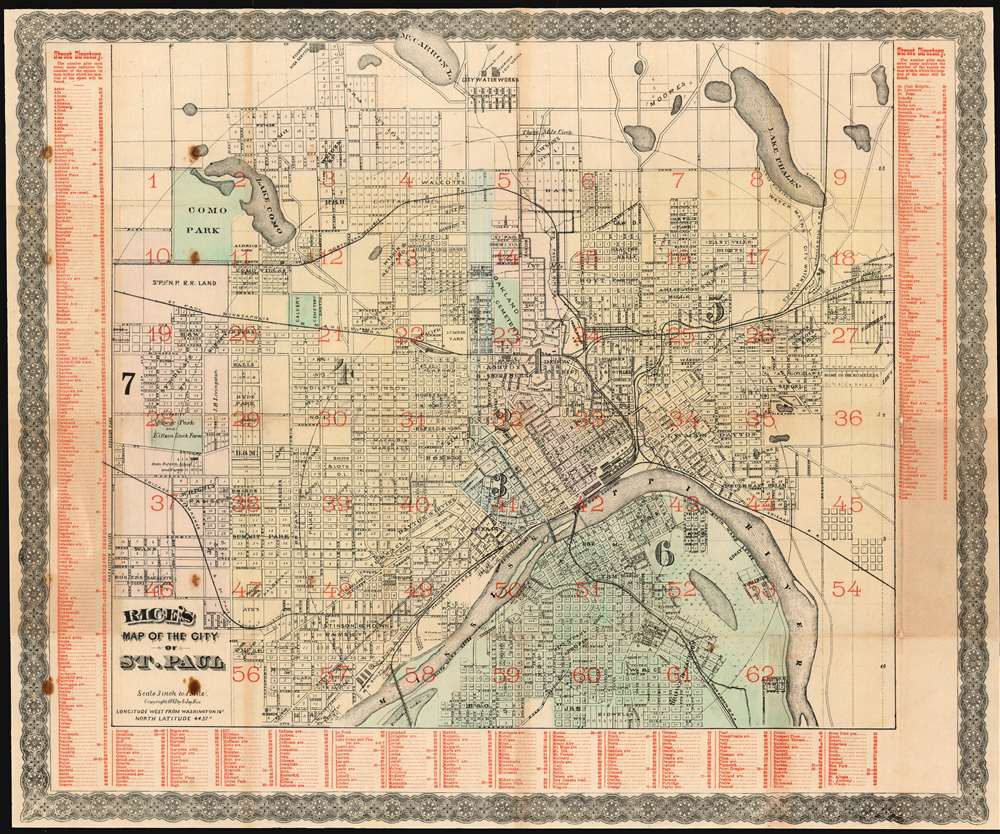 A scarce 1885 map of Saint Paul, Minnesota by Gilbert Jay Rice. The map covers all of Saint Paul on both sides of the Mississippi River. The map has here been lithographed in two passes, once with black ink, and again with red overprinting - a feature along with the wash color that appeared only on deluxe issues of the map.

The coves Saint Paul from Snelling Avenue in the west to just beyond English Avenue in the east; the southern limit is Annapolis Street, and the map reaches as far north as Mccarron's Lake and the city waterworks. Where blocks have been subdivided into lots, these are numbered; streets are named, as are railroads, parks, and municipal works. The map also numbers the city's electoral wards, to which this 1885 state of the map includes a seventh not present on the 1883 edition. A second, red-colored printing pass gives the map a detailed street directory keyed to numbers applied to the grid.

The city's identification as a rail hub crossing the Mississippi is underscored by no fewer than six railroad lines and two railway bridges. Two steamboat landings serve the city center, and a bridge for all other traffic connects Wabash street to Dakota Avenue.

This map was published in St. Paul by Jay's 'Saint Paul Lithographic Company.' Variants of the map are known as early as 1873 and as late as 1888. There are perhaps 13 examples cataloged in OCLC in various issues - some without the red print, some without the wash color. This edition - with an 1883 copyright but dated 1885 on the cover - is cataloged only in the collection of the National Library of Scotland.

Good. Backed on archival tissue for stability. Exhibits wear along original fold lines. Exhibits small areas of infill at fold intersections and along a fold line. Accompanied by original binder.