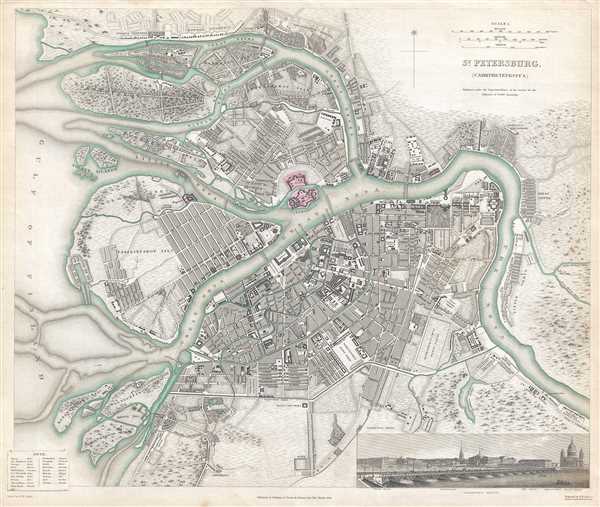 This is a scarce 1834 map or city plan of St. Petersburg, Russia, published by the Society for the Diffusion of Useful Knowledge. It covers the second largest city in Russia located on the Zayachii Ostrov in the Neva River. St. Petersburg was Imperial capital of Russia from 1732–1918. Centered on the Peter and Paul Fortress, the map shows fine engraved detail including individual streets, houses, cemeteries, rivers, streams, churches, bridges and beautifully rendered parks and fields. A panoramic view shows the city with the Isakiefskoi Bridge in the foreground. The map also identifies the Winter Palace, Admiralty, War Office, Statue of Peter I, and Isaac's Church.

This map was part of A Series of Maps, Modern and Ancient, issued by subscription by the SDUK. Each folder in the series would contain a set of two maps bound together. The map accompanying this folder, not included here, was of Edinburg, London. The original folder included the names of committee members of the ‘Society’, notices to subscribers, the folder number, which is this case was XLVIII, the contents and the printer and publication details.

This map was printed by William Clowes and issued by the Society for the Diffusion of Useful Knowledge in their March 1834 subscriber’s edition folder and published by Baldwin and Cradock. The folder at the time was priced at 1 shilling plain or 1 shilling 6 pence colored.