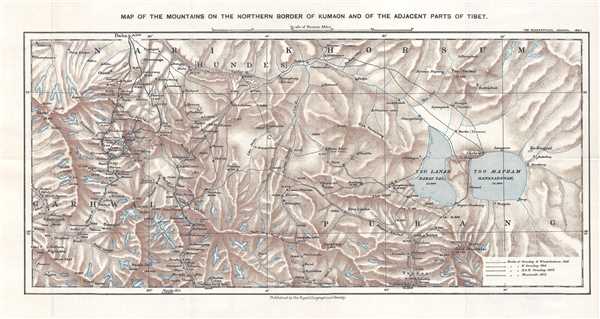 Illustrates early British expeditions into Tibet - which foreigners were then forbidden to enter.

This is a 1900 Royal Geographical Society map tracing the three surveying expeditions mounted by Sir Henry Strachey, his brother, Sir Richard Strachey, and J. E. Winterbottom, despite the longstanding prohibition on the entry of Europeans into Tibet by Tibetan authorities. The map depicts the region from Jyotirmath (Joshimath), India to Lake Manasarovar in the Tibet Autonomous Region of China and from Daba, China to Trisul, India, a group of three Himalayan mountain peaks in western Kumaun. The first expedition was carried out in 1846 by Henry Strachey on his own and he surveyed the regions around Lakes Manasarovar and Rakshastal. It was on this first expedition that Strachey found a channel between Lake Manasarovar and Lake Rakshastal, which suggested that Manasarovar was the source of the Sutlej River, and not Rakshastal. Strachey's brother, Sir Richard Strachey, and J. E. Winterbottom mounted the second expedition into the region in 1848 and continued Henry's exploration of the lakes and the surrounding region. The third excursion illustrated on the map was undertaken by the Strachey brother in 1849 and explored the Niti Pass out of Garhwal. A fourth, much earlier expedition into the region is also illustrated. This one was led by William Moorcroft, an English explorer, with the stated goal of establishing trade relations between India and Central Asia.

This map was produced by the Royal Geographical Society and published in Volume 15, No. 2 of The Geographical Journal.