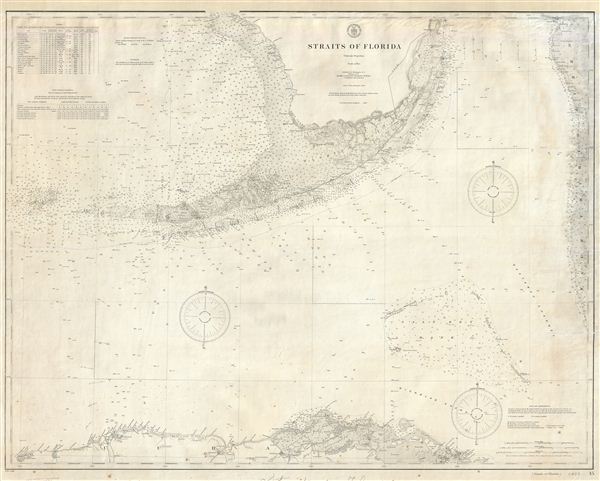 A scarce 1908 U.S. Coast Survey nautical chart or maritime map of the Straits of Florida. The map covers from Miami and Biscayne Bay south as far as northern Cuba and Havana (Habana), east as far as the Great Bahama Bank, and westward past Key West as far as the Dry Tortugas. The chart offers a wealth of detail including impressive inland detail and countless depth soundings. Shading further highlights shallow areas along the coasts - where instead of fathoms, all sounding are represented in feet for greater accuracy. The upper left quadrant offers a wealth of practical information for the mariner, including notes on currents, lighthouses, and soundings. Published by the United States Coast and Geodetic Survey under the superintendence of O. H. Tittmann.

Good. Map has been professionally restored and backed with fine linen. Upper margin extended. Some discoloration along right margin.