1940 Harrison Map of Europe During the 'Phoney War' 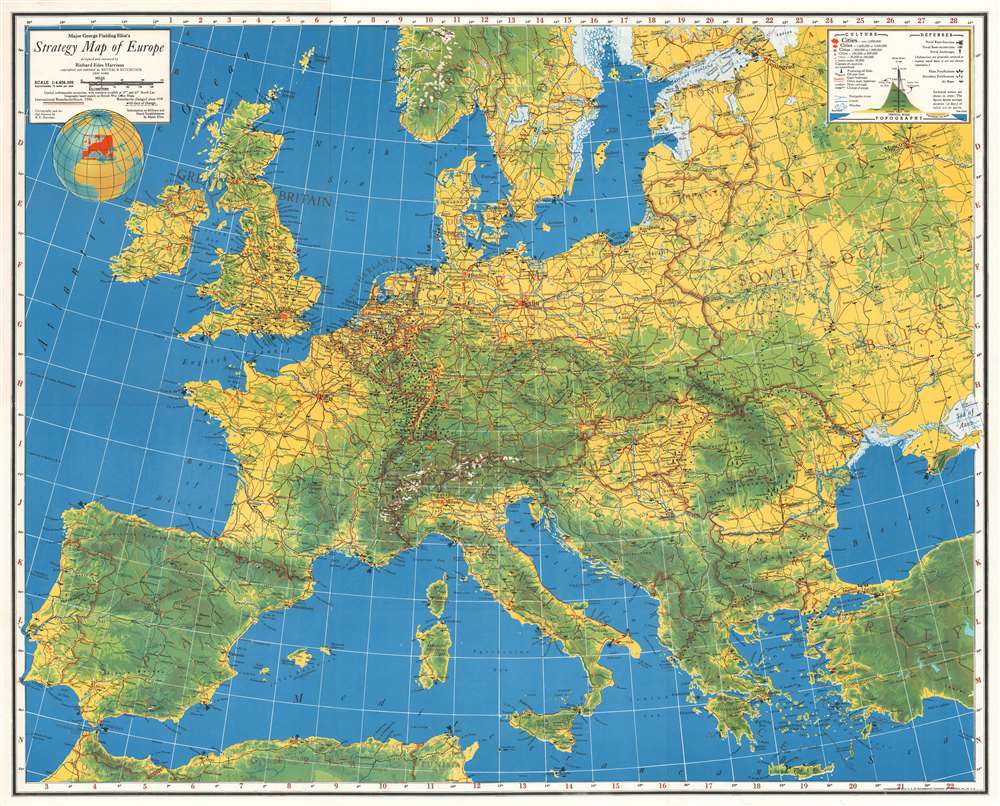 1940 Harrison Map of Europe During the 'Phoney War'

Focuses on the military situation in Europe between the beginning of World War II and the German invasion of France and the Low Countries.
$400.00

This is a 1940 Richard Edes Harrison and George Fielding Eliot map of Europe during the 'Phoney War'. 'Phoney War' is the name given to the period at the beginning of World War II between September 3, 1939, when the United Kingdom and France declared war on Nazi Germany, and May 10, 1940, when Germany launched its invasion of France and the Low Countries. Very little fighting occurred between the Western Allies and Germany during these eight months, which led U.S. Senator William Borah to comment in September, 'There is something phoney about this war'. This collaboration between Eliot and Harrison provides an impressive overview of the military situation during this period of relative calm. The Maginot Line and Siegfried Line, fortification systems built by France and Germany respectively along the border between their respective countries, are immediately evident due to the high concentration of symbols illustrating fortifications and air bases in the area. Air and naval bases are identified throughout continental Europe and the U.K., along with oil fields, oil pipelines, and railroads. Color is used to illustrate topography. A key situated in the upper right corner explains the different notations used.

This map was designed and executed by Richard Edes Harrison, with all information on military and naval establishments was provided by Major George Fielding Eliot. It was published by Reynakl and Hitchcock in 1940.


George Fielding Eliot (June 22 1894 - April 21, 1971) was an officer in two separate armies and a police officer, published author, syndicated newspaper columnist, and CBS News military analyst during World War II. Born in Brooklyn, New York, Eliot moved with his parents to Australia at the age of eight. He attended the University of Melbourne where he was a member of the cadet corps. At the outbreak of World War I, Eliot was a second lieutenant in the Australian infantry. He fought in the Gallipoli Campaign from May to August 1915, and was transferred to Europe in 1916 where he fought at the battles of the Somme, Passchendaele, Arras, and Amiens. By the end of the war, he had been wounded twice and held the rank of acting major. He moved to Canada after the war and became a member of the Royal Canadian Mounted Police and served for two years. Eliot then moved back to the United States and became a reserve officer in the U.S. Army reserve and served in military intelligence from 1922 until 1933, eventually attaining the rank of major. He resigned his commission in 1933 in order to have greater freedom to write and comment on military affairs and the impending war. Eliot lived in the central United States during the 1920s and 1930s and worked as an accountant. He began writing pulp fiction and crime novels in 1926. He wrote numerous articles on the war and military strategy during World War II for publications such as Life, The American Mercury, Current History, and Harper's Magazine. He served as a foreign correspondent for CBS and broadcast from London alongside Edward R. Murrow and H. V. Kaltenborn in 1939, and, on December 7, 1941, Eliot was part of both the radio and television coverage of the Japanese attack on Pearl Harbor. CBS broadcast ten hours of television coverage on December 7, making this the first extended television coverage of a breaking news event. Eliot worked as a staff writer for the New York Herald Tribune and continued to write books and articles on military strategy well into the 1960s. Eliot married Sara Elaine Hodges in 1933, whom he divorced in 1942. In 1943 he then married June Caley Hynd. Learn More...