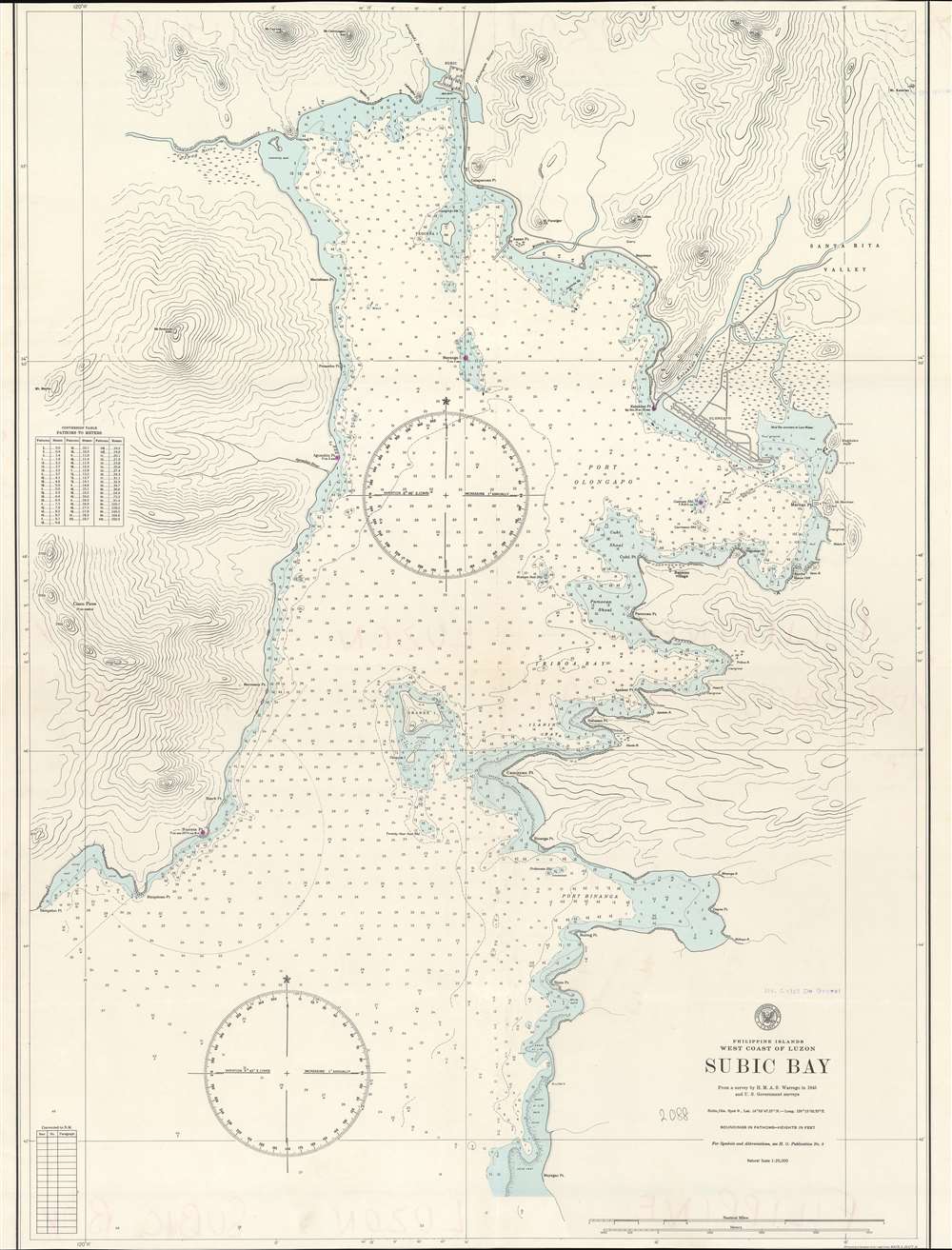 This is a 1945 U.S. Navy Hydrographic map of Subic Bay on the west coast of Luzon in the Philippine Islands. The map depicts the region from Sampaloc Point to the Santa Rita Valley and from Subic City to Mayagao Point. Highly detailed, myriad depth soundings are noted throughout. Points, ports, and shoals are labeled. The town of Subic is situated at the head of the bay, while Olongapo is located along the bay's eastern coast. Numerous rivers are identified, as are mountains and swamps.

Subic Bay and the U.S. Navy

Beginning with the Spanish, Subic Bay had functioned as a naval base. The Spanish initially based their forces at Cavite, which proved to be unhealthy and vulnerable to bad weather and attack in times of war due to its shallow water and lack of shelter. Reluctant to relocate the fleet to Subic Bay due to its distance from Manila, the fleet finally moved in 1884 following a Royal Decree. After the American occupation of the Philippines began following the Spanish-American War, the U.S. Navy decided to build a naval base at Subic, after they had quashed resistance in the region during the Philippine-American War. Construction at the base continued through World War I, but, after the U.S. signed the Washington Treaty of 1922, which was an arms-reduction treaty, the base shrank incredibly. The Japanese also kept a close eye on the base at Subic for treaty violations. By the Japanese invasion of the Philippines in December 1941, the naval base at Subic was completely unprepared to defend itself, much like the rest of the American forces stationed in the archipelago. The base at Subic was burned to the ground, as was the neighboring city of Olongapo, to keep the Japanese from benefitting from any infrastructure or facilities there, and all U.S. forces withdrew to Bataan. The Japanese used Subic Bay during the war, but to no great advantage. After World War II, the base at Subic Bay was rebuilt and expanded, reaching the height of its importance during the Vietnam War when it served as the forward base for repair and replenishment for the U.S. Seventh Fleet. The base was closed in 1992 following the June 15, 1991 eruption of Mount Pinatubo.

This map was created by the U.S. Navy Hydrographic Office in 1945. This is the only known example of this chart.

Very good. Even overall toning. Light wear along original fold lines. Top and bottom margin cut to neat line. Writing on verso.
Looking for a high-resolution scan of this?