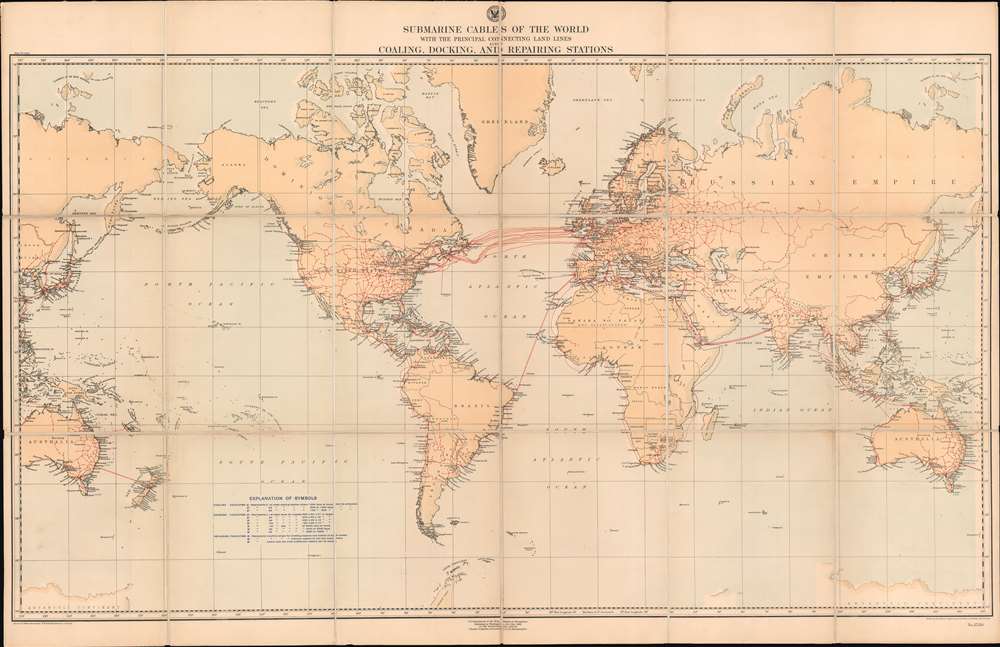 Presents the state of international communication via submarine cables.
$1,200.00

A striking look at the state of global communication on the eve of the twentieth century, this is an 1896 H.G. Brewer map of the world illustrating the network of submarine cables. The map depicts the world on a Mercator Projection from the Philippines to the Caroline Islands and the Coral Sea and from Greenland to Antarctica. Telegraph cables are highlighted in red.

Red lines traverse the globe, connecting distant lands in ways people a century earlier could never have fathomed. Over a dozen different cables connect Europe and North America, when less than fifty years before not one such cable existed. Cables link London to Bombay and Lisbon to Pernambuco. Hundreds of shorter land lines expand across the globe like a web, allowing communication at speeds never before experienced by humanity. An article in the July 1897 issue of The New England Magazine by George Ethelbert Walsh entitled 'Girdling the Globe with Submarine Cables' makes this abundantly clear by directly referencing this map

An elaborate chart recently issued by the United States Hydrographic Office presents in detail the submarine cables of the world…enabling the student to take in at a glance the intricate network of life lines that pulsate between vast continents with the thoughts of a civilized world. The globe seems smaller and the uttermost parts of it less separated by time and distance as one studies this chart, compiled as much in the interest of war as of peace. The sun can scarcely set upon a land that is not bound to the rest of the world by any one of these electric cables.

Aside from the submarine cables, coaling, docking, and repairing stations around the world are also indicated. These stations were critical to international shipping at the time, since all vessels were coal-burning steamers. These facilities could accommodate varying degrees of need based on each facility's capacity, as is explained in the table in the lower left quadrant in the South Pacific Ocean. Three tiers are noted for each type of facility, with tier one facilities capable of providing the best services with regard to the procurement of coal, docking, and repairs, respectively.

This map was drawn by H.G. Brewer, engraved by C.E. Birch, J.A. Waddley, and R.E. Gray, and published by the Hydrographic Office of the Bureau of Navigation of the U.S. Department of the Navy in 1896. The OCLC catalogues this map as being part of the collections at Cornell University, Syracuse University, Pennsylvania State University, the Smithsonian Institution, the Osher Map Library at the University of Southern Maine, Ball State University, and Florida State University.


The United States Hydrographic Office (1866 - 1962) prepared and published maps, charts, and nautical books to aid in navigation. Before the establishment of the Hydrographic Office in 1866, U.S. navigators were almost entirely dependent on British charts. There had been a few private enterprises that had prepared and published charts, but none had been able to do so profitably. The Office was established 'for the improvement of the means of navigating safely the vessels of the Navy and of the mercantile marine, by providing, under the authority of the Secretary of the Navy, accurate and cheap nautical charts, sailing directions, navigators, and manuals of instructions for the use of all vessels of the United States, and for the benefit and use of navigators generally.' This way the Navy Department could furnish navy and merchant ships with charts illustrating the results of surveys and explorations undertaken by naval officers. Not meant as a rival to the British Admiralty hydrographic office or the French Dépôt des Cartes et Plans de la Marine, the charts were priced to cover the cost of paper and printing alone, not preparation. Its main objective was to survey foreign coasts, as the Coast and Geodetic Surveys were responsible for surveying domestic waters. The Hydrographic Office was transferred from the Department of the Navy to the Department of Defense in 1949 and was replaced by the Naval Oceanographic Office in 1962. Learn More...

Very good. Dissected and mounted on linen in 18 panels. Blank on verso.