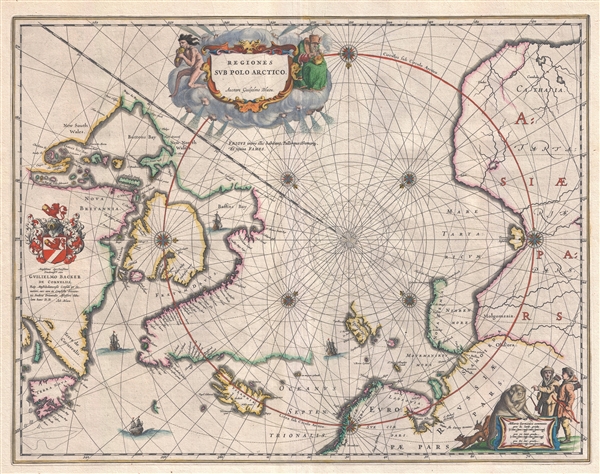 Wonderful example of Blaeu's map of the Northern Polar Regions arguing against the Northwest Passage.

A fine example of the second edition of Guillaume Blaeu's iconic map of the Arctic. The map covers from the north pole south as far as Nova Scotia, James Bay, Iceland, and Norway. Blaeu has here abandoned the fanciful cartographic ideas of the previous generation to produce an entirely new map based largely upon exploration and discovery. Those unexplored arctic lands surrounding the pole are left blank. Greenland and the lands to the north of Baffin Bay and to the West of James Button Bay fade away. Even the eastern shores of Nova Zembla, and the northern shores of Spitzbergen, and left unmapped. By contrast, explored lands are shown in relative detail. The discoveries of James, Barentsz, Baffin, Frobisher, Hall, Davis, and others are noted. In particular, this map incorporates the discoveries of James along the southern and western shore of Hudson's Bay in 1631-32, and promotes the expectation that the Northwest Passage across northern North America did not exist. This map first appeared around 1638 in the undated French Appendice to Blaeu's atlas.

Burden, P., The Mapping of North America, #252.
Looking for a high-resolution scan of this?