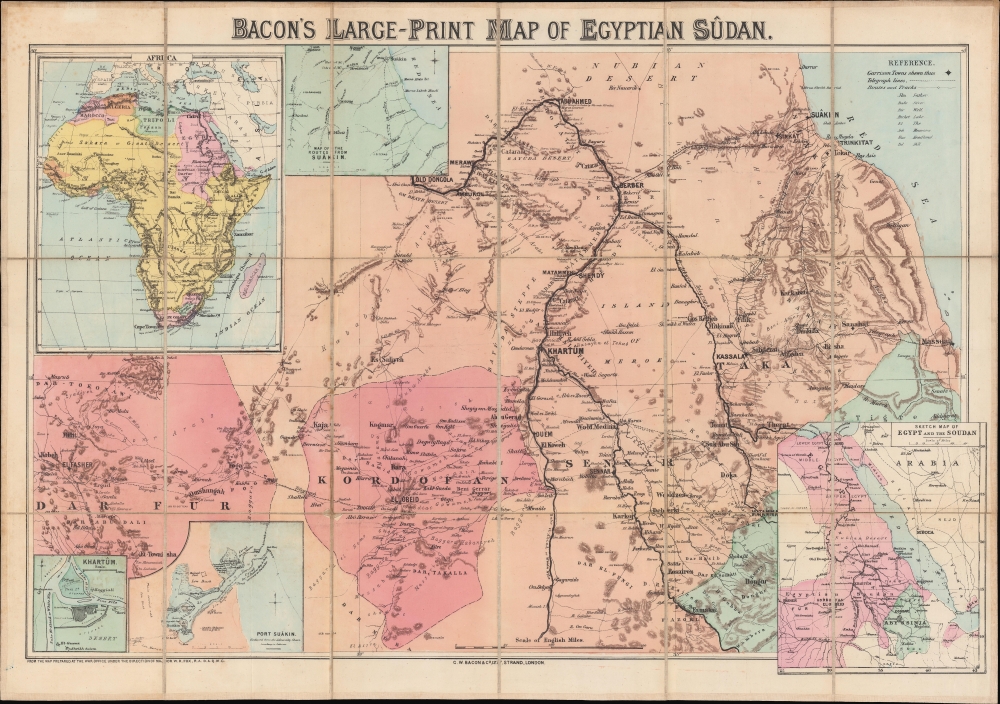 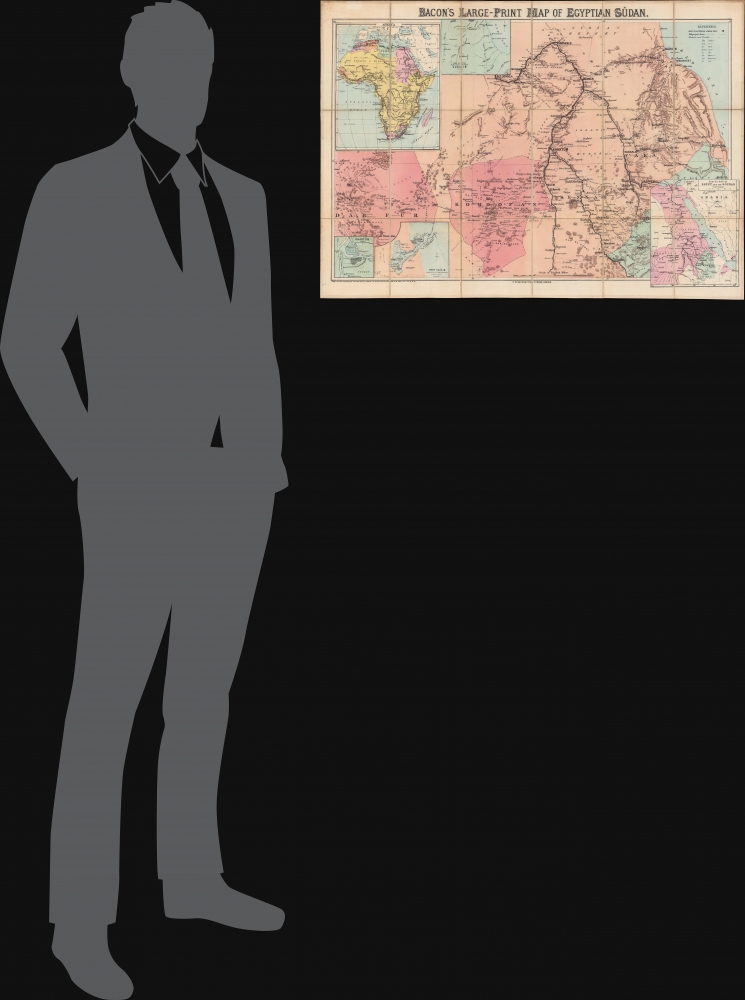 A colorful, large format c. 1884 chromolithograph folding map of Sudan by G. W. Bacon and Co. The map was produced during the Mahdist War, a widespread revolt against the British-backed Khedivate of Egypt, more specifically during or soon after the Siege of Khartoum and an ultimately failed British expedition to relieve the city.

Coverage extends from Darfur to the Red Sea, covering an area largely congruent with the present-day Republic of Sudan. The Nile River system, including the White, Blue, and Black (Atbarah) Nile, stands out prominently in bold black lines. Roads ('routes and tracks'), railways, telegraph lines, garrisons, towns, hills, wells, and other water sources are indicated. The Arabic names of regions and geographic features are included, along with local groups or tribes. A legend at top-right lists translations of Arabic terms, while five inset maps surround the main map, depicting (clockwise): a wider view of Egypt and Sudan, the port city of Suakin, Khartoum, a map of the entirety of Africa, and a map showing the land approaches to Suakin from the south.

This map is undated and only obliquely mentions conflict, but it was produced in the context of the Mahdist War, a massive Holy War against the rule of the British-backed Khedivate of Egypt beginning in 1881. The conflict was initially only one of many in the orbit of Britain's global empire, but it captured the public's imagination in 1884, when the charismatic adventurer-soldier Charles Gordon, acting beyond his orders from the British government, decided to defend Khartoum in a months-long siege, prompting the organization of a relief expedition.

Charles George Gordon (1833 - 1885) was one of the more colorful and storied British imperial adventurers of the 19th century. Born to a family with a long line of British military service, he attended a military academy and then served in the Royal Engineers during the Crimean War with great distinction. Already at a young age, Gordon had a reputation for pluckiness and for disregarding orders, which would ultimately be his undoing.

Finding peacetime life uninteresting, Gordon volunteered to fight in China during the Second Opium War (1856 - 1860), which he arrived too late to participate in, instead finding work in Shanghai leading a multinational group of mercenaries known as the Ever Victorious Army against the rebels of the Taiping Heavenly Kingdom. He gained a reputation for honesty and effectiveness, imposing strict discipline on his mercenary force that was otherwise prone to plunder, rape, and corruption. Gordon was highly decorated by the Tongzhi Emperor and was praised by the foreign community in China, earning him the nickname 'Chinese Gordon.' At the same time, his frankness, such as criticizing Chinese officials to their face and refusing monetary rewards from the emperor, was seen as uncouth and impudent.

After his service to the emperor in China, Gordon found employment with the Egyptian Khedive government, which appointed him as governor of their southern Equatoria province, over which they had only nominal control. Gordon was appalled by the Ottoman-Egyptian bureaucracy, which he found oppressive and corrupt, and the prevalence of the slave trade (Gordon's abolitionism was inspired by his intense religiosity). Nevertheless, his capabilities as an administrator and diplomat allowed him to rise to the position of Governor-General of the Sudan, earning the new nickname of 'Gordon Pasha'. Still, Gordon eventually alienated other officials in the bureaucracy (several of whom he fired) to the point that he was not asked to continue in his position and left Egypt in 1880.

He then briefly worked as a bureaucrat in India before resigning, returning to China (against orders from the military), and agreeing to an administrative position in the Congo Free State (he was an enthusiast for the project and its architect King Leopold II, not foreseeing the horrific reality that would emerge there). But before he could begin work in the Congo, Gordon was called on by the British government to report on a large-scale rebellion in Sudan known as the Mahdist Uprising.

Given his prior experience, Gordon was an obvious choice for such a mission, but his public statements about the uprising and his desire to see British military intervention made the government wary of sending him. It ultimately relented to public pressure, giving Gordon a mandate only to gather information and organize an orderly evacuation of Khartoum. Gordon indeed evacuated Khartoum of civilians, but then 'went rogue' and attempted to defend the city, hoping to use it in the future as a base from which to subdue the Mahdist rebels. Initially, his position looked strong, as he had ample supplies and the city was ideally suited for defense, surrounded by the Nile and rows of fortifications. Relying on friends in the press, Gordon continuously appealed to the British public to pressure the government to send a larger force to defend Khartoum.

By March 1884, Khartoum was completely cut off and surrounded by Mahdist troops. The Gladstone government was deeply opposed to any effort to relieve Gordon, but by August had to relent to public pressure and authorized a relief force, led by General Garnet Wolseley, who like Gordon was very adept at using the press to rile up the public and pressure the government. Not wanting to send a regular force, the government enlisted French-Canadian voyageurs as private mercenaries, but by the time they arrived in Egypt and were prepared to travel by camel and steamship up the Nile, it was already October. Ascending the cataracts of the Nile (some of which are indicated here) was an especially difficult process and, along with skirmishes with Mahdist forces, delayed the expedition's progress by weeks. The relief force began to suffer exhaustion and casualties, including two of its leading officers, Herbert Stewart and William Earle (the locations of their deaths are noted along the Nile).

The advance of the expedition was closely tracked in the British press. In the meantime, Gordon's force had been reduced by disease and skirmishes, and his supplies were running low. The relief force finally reached Khartoum on January 28, 1885, but the Mahdists had finally stormed the city two days earlier, captured it, and killed the entire garrison, including Gordon. The British public was incensed at the death of the popular Gordon, and blamed Wolseley and the other leading officers of the relief expedition for delays, as well as the Gladstone government for its reluctance to send a relief force in the first place. Gordon was lionized as one of the great military heroes of his age, while historians have subsequently debated his legacy, his psychology, and his significance as a public figure of the late Victorian era.

Concurrent with the Gordon Relief Expedition, a contingent was sent to conquer the port of Suakin from Mahdist forces. Following the fall of Khartoum, this group managed to capture the port, but soon afterwards the Gladstone government decided to abandon the Sudan. The British returned several years later, crushed the Mahdists, and established a 'condominium' (effectively a protectorate) over Sudan.

This map was published by G. W. Bacon and Co. in late 1884 or early 1885. It is listed in the OCLC five times with various dates (likely due to confusion rather than multiple editions). Regardless of the date ascribed, it is held by seven institutions worldwide, with the Library of Congress and the University of Victoria being the only two in North America. This piece has no known history on the market.

Very good. Dissected and laid on linen. Wear and small area of loss at one fold intersection towards bottom-left. Light foxing in top-left corner.