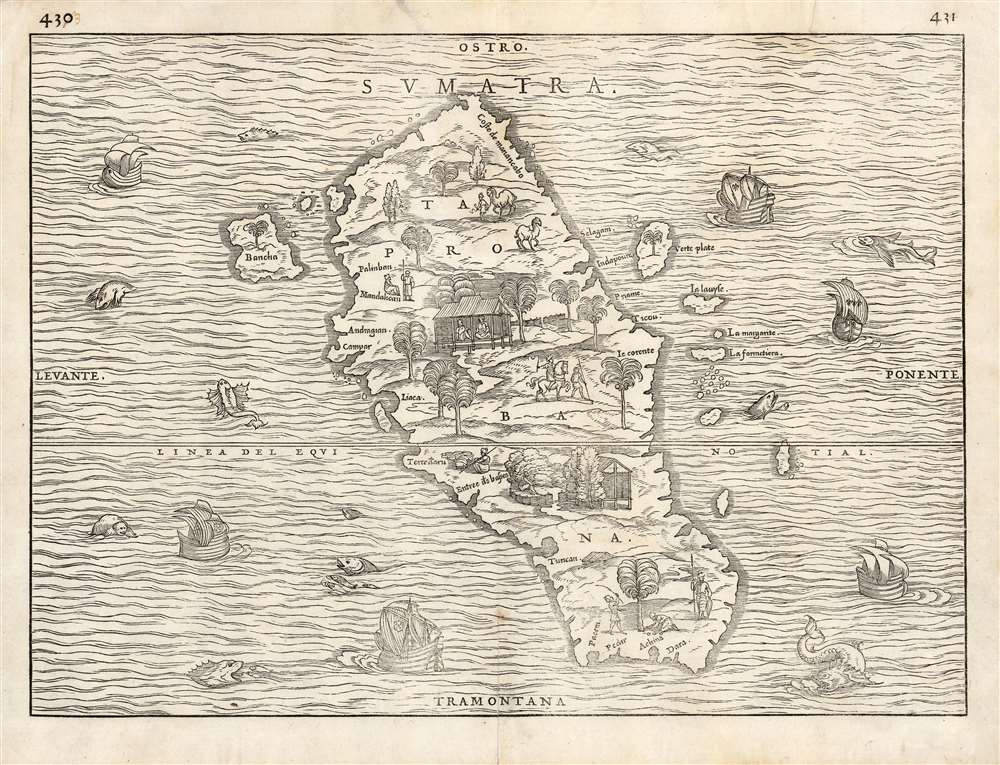 The first separate map of any Southeast Asian island to be based on actual observation.' - Suarez

This is the seminal 1556 Giovanni Battista Ramusio map of Sumatra, 'the first separate map of any Southeast Asian island to be based on actual observation' (Suarez) and one of the first European maps to focus narrowly on so remote a part of the world. It appeared in Ramusio's i>Navigationi et Viaggi, the first collection of explorers' first-hand accounts of their travels. The source for this particular map came from the reports of Jean and Raoul Parmentier, who in 1529 ran the Portuguese blockade and attempted to compete with that power on behalf of the French by setting up a trading post at the Sumatran port of Ticon. It didn't work out - the Parmentier brothers died of fever, and only one ship of the expedition returned to France. The French saw no advantage in following up on this failure.

The woodcut, nonetheless represents the first glimpse in print of any specific Southeast Asian island, and this alone would make it desirable. It is moreover a very attractively executed woodcut: the sea around the island teems with fish, sea monsters, and ships - some of these bearing the Portuguese arms, and some flying the fleur de lis, alluding to the map's political context. There is also an element of Ramusio perhaps egging on his French audience, suggesting that whatever the Portuguese have found, the French ought to be able to take.

The map of the island is the first to entirely abandon Ptolemy's depiction of Taprobana, and along with Münster is among the first to associate the placename Taprobana definitively with Sumatra rather than Ptolemy's conflation of the place with Sri Lanka. It is moreover also the first map to approach an accurate outline of Sumatra, showing river inlets and bays on the coastline realistically. The island's inland features are presented pictorially, showing trees, dwellings, animals and people - men leading horses and camels, armed soldiers, men on horseback, and others harvesting coconuts. The variety and specificity of the depicted denizens suggest the presence of, and the author's familiarity with, organized social structures on Sumatra: an indication that here was not an uncivilized place, (like Ramusio's demon-haunted map of Canada), but somewhere one could go to do business.

Ramusio, in the introduction to his Navigationi et Viaggi, wrote that he asked Giacomo Gastaldi to provide maps for his work. It is not known whether the great Venetian cartographer actually did so himself: this map certainly does not resemble Sumatra as it appears on Gastaldi's 1548 map of Southeast Asia, although the island as depicted in his 1561 map of the region bears some similarity, so Gastaldi may have become familiar with this geography via the same reports informing Ramusio.

This map was first cut by Matteo Pagano for inclusion in the 1556 third volume of Ramusio's Navigationi et Viaggi. The woodblocks for this, and indeed all of the maps of the 1556 edition burned in a 1557 warehouse fire. It appears in only one known state. The blocks were all re-engraved, probably again by Pagano, for the 1565 edition of the Navigationi et Viaggi. The second block is geographically identical to the first; the two blocks are most easily distinguishable by differences in the trees appearing behind the various buildings. That second block was employed one more time in 1606, this edition easily identifiable by the small worm-shaped blank areas (woodworm appears to have similarly infested all blocks of the 1606 edition.) The 1556 edition of the third volume of Navigationi et Viaggi. is rare. Seven examples of the 1565 are listed in OCLC, while perhaps twenty of the 1606 edition appear in institutional collections. Only one example of this separate map is catalogued in OCLC, appearing in the National Library of Scotland.