1827 Vandermaelen Map of Sumatra, the Sunda Strait, and the Java Sea 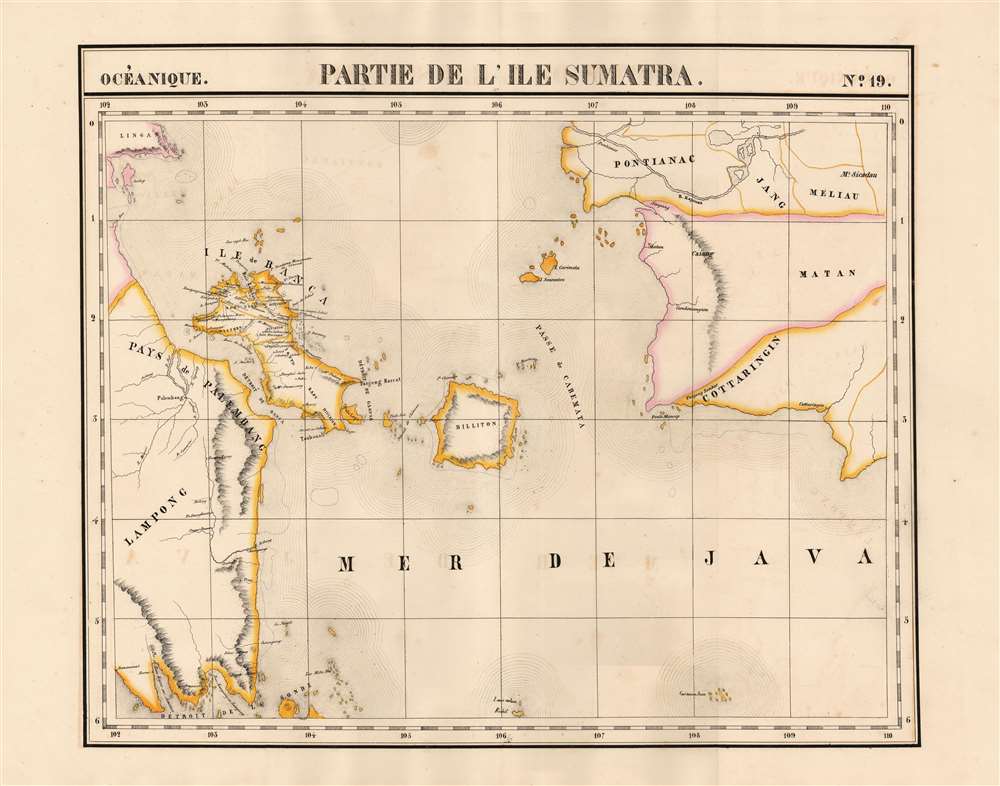 1827 Vandermaelen Map of Sumatra, the Sunda Strait, and the Java Sea

This is 1827 Vandermaelen map of Sumatra's east coast, the Caremata Straits, the Sunda Strait, and the western part of the Java Sea. It is the first map of the region produced by lithography. The map extends as far as the southwest coast of Borneo, and also shows the Bangka Belitung Islands, and the island of Belitung. The coast of Java only appears in the form of the mountainous peninsula north of Cilegon. The scattered, tiny islands north of Jakarta appear here as a largely imaginary archipelago labeled 'Les Milles Iles.'

The map shows an area hotly contested by the British and the Dutch. The region had been the sphere of influence of the Sultanate of Palembang until the British sacked the city and installed a pro-England sultan in 1812; the Dutch subsequently took Palembang in 1821. abolishing the Sultanate in 1825. Under the Dutch, Palembang became the capital of the Residency of Palembang, which would after independence became South Sumatra. At the time this map was printed, the Dutch were introducing new export crops (coffee in particular.)

The islands of Belitung (here using its English spelling, Billiton) and Bangka are shown; these were ceded to the British in 1812, and passed to the Dutch in 1814. A fort is shown at Toboali (Toubouali) in the area where a Dutch fort was constructed in 1825. At the time, it was known for its pepper, and as early as the late 18th century was being extensively mined for tin. Mines appear on Banka in the northern and western administrative divisions. This island shows much more detail than the other regions, offering reasonably up-to-date information, perhaps a reflection on the importance of its resources - which represent a point of contention to this day, as Bangka is the world's second largest producer of tin (narrowly edged out by China) to the detriment of its environment.

This map appeared in the sixth part, 'Océanique,' of Vandermaelen's Atlas universel de géographie physique, politique, statistique et minéralogique. The atlas was produced in one edition in 1827; only 810 complete sets were sold. The full set of six volumes appears in eleven institutional collections in OCLC; the 6th volume alone is listed in 10. This map is listed as a separate only in the collection of the National Library of Australia.

Vandermaelen, P. Atlas universel de geographie physique, politique, statistique et mineralogique, (Bruxelles: Vandermaelen) 1827.     Atlas Universel de Geographie. This great work, featuring some 378 unique maps and compiled over three years, was the first lithograph atlas, and the first to render the world on the same projection and at a uniform scale. It was no doubt Vandermaelen’s training a globe maker that led him see the need for an atlas rendered uniformly so that all bodies could be understood in relation to one another. As a result, many newly emerging areas received more attention than prior efforts. Maps of the American West, in particular, benefited: ‘no mapmaker had previously attempted to use such a large scale for any western American area.’ (Wheat). Central and South Asia also appear in sharper focus. Despite Vandermaelen’s reliance upon existing sources, his maps very frequently provided the clearest depictions available of many poorly-understood parts of the world. The atlas was an expensive production, costing $800 in 1827. Subscription lists indicate that only 810 full sets of the atlas were sold. It was printed on high-quality paper with superior hand coloring and was engraved in a clear, legible style. Conjoined, the maps of Vendermaelen's atlas would create a massive globe some 7.75 meters in diameter, a feat which was accomplished at the Etablissement Geographique de Brussels.