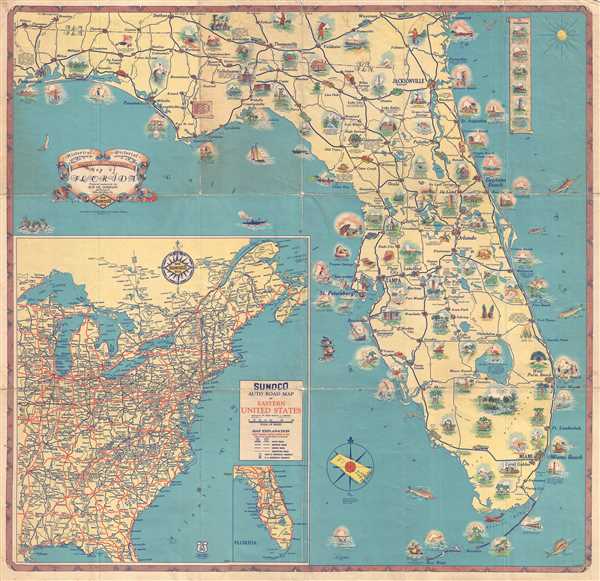 This is a 1937 Sun Oil Company (SUNOCO) and Rand McNally pictorial map of Florida. The map depicts the region from Pensacola Bay to the Atlantic Ocean and from Alabama to Key West. Functioning as both a road map and a tourist map, Florida's history is traced through the vignettes included throughout. Battle sites, forts, natural wonders, and monuments are some of the highlighted locations. Along with these cultural sites, Floridians are illustrated hunting, fishing, playing tennis, and spending time on the beach, portraying the idea that life in Florida is a constant vacation. Cities throughout the state are labeled, including Tallahassee, Gainesville, Tampa, Pensacola, St. Augustine, Orlando, and Miami. Lake Okeechobee, the second-largest fresh water lake in the United States, is prominently featured with a flamingo relaxing in its center. A road map of the eastern United States is inset in the lower left corner, along with a map of the main through routes of Florida.

This map was produced by Rand McNally for the Sun Oil Company and published in 1937.

Good. Wear and toning along original fold lines. Verso reinforcements along most fold lines and at fold intersections. Sunoco Auto Road Map of Florida on verso.