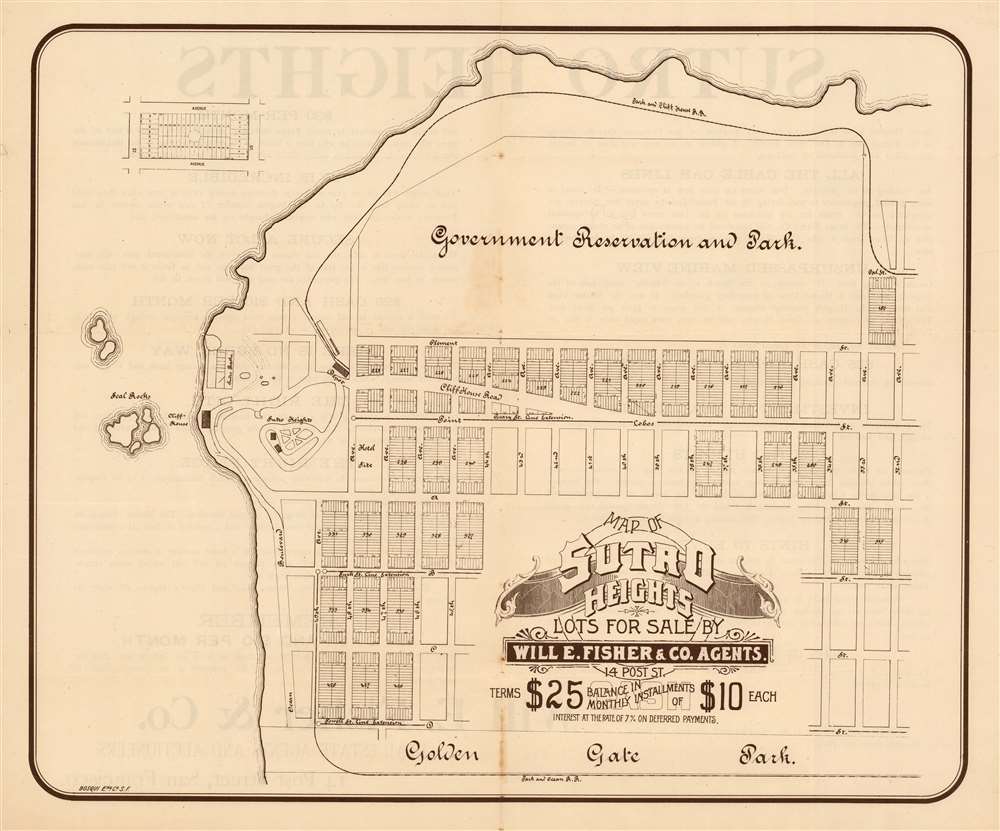 This is an elegant 1893 lithograph map of the Vista Del Mar neighborhood of San Francisco - at that time promoted as Sutro Heights. The lots for sale on this map fall between what is now Geary Boulevard and Fulton Street, west of the Richmond district.

The land had been purchased in 1881 by silver baron and future San Francisco Mayor Adolph Sutro. (His own 'Sutro Heights' estate, on a promontory overlooking the Pacific, is visible: it is now the grounds of Sutro Heights Park.). Sutro developed public baths and an amusement park to add attractions to the area, and constructed passenger steam trains (also shown on the map) in order to make it all easily accessible. All that remained was to start selling lots, hence this advertisement. And yet Sutro died with a lot of land, but cash poor. What could possibly have gone wrong?

To sell the real estate, Sutro appears to have enlisted real estate agent Will E. Fisher. Fisher, an employee of the firm of Tevis and Fisher until his marriage to wealthy widow Rebecca Jennings in 1891, made a sudden and bold entry to the San Francisco real estate market. Between 1892 and 1897 his advertisements in the San Francisco Call and Chronicle were ubiquitous, and Fisher splashed out on broadsheets printed by the illustrious Edward Bosqui's lithographic shop to promote sales from larger developments, such as this one. This beautifully executed map can be viewed as coming from Fisher's glory days: a high liver with a powerful thirst and evidently a poor head for money, Fisher's fortunes were overturned in 1896. His real estate business would self-destruct amid accusations of embezzlement; in January of 1897 he briefly disappeared in order to escape some fifty thousand dollars in debt, eighty percent of which was owed to his wife - who divorced him the following week, with accusations that her husband had been fully drunk the entire year.

His real estate enterprise in tatters, Fisher saw rescue in the Klondike gold rush, and went with a group of fortune-seekers to try his luck. It was a disastrous venture: At least two of his confederates drowned to death, and rumors abounded that the once high-flying Fisher had had his legs frozen off and was crawling about Dyea, Alaska in extravagant destitution. This last indignity proved not to be the case: the September 23 Chronicle reported the return to San Francisco of Fisher, with his health and both legs.

Fisher is very conservative in his statements regarding the Northwest Territory, and like many of those who have come out with (gold) dust he positively refuses to saw (sic) how much he brought with him. He is perfectly satisfied, but expressed the belief that he would never again go north...

The printer of this lovely broadsheet, Edward Bosqui, also saw his fortunes turn in the 1890s. His printing firm, established in 1863, burned in 1893; in 1897 his house burned.

This map was produced in 1893 by the Bosqui Engraving Co. on behalf of the Will E. Fisher real estate company. Any surviving examples are those which were disseminated: no old stock is likely to have survived the 1893 fire which destroyed the Bosqui firm. We are aware of a handful of examples that have appeared on the market since 1995, but overall, this map is rare. OCLC only lists five examples in institutional collections, residing at Columbia, Stanford, Yale, the University of California at Berkeley, and the California Historical Society.

Edward Bosqui (1832–1917) was a Canadian artist and printer, and patron of the arts based in San Francisco, California. He was born in Montreal and came to California in 1850; his early training is obscure, but he founded the Bosqui Engraving and Printing Company in 1863, to some success until misfortune struck in the destruction of his business by fire in 1893, and of the burning of his home in 1897. Bosqui helped organize the San Francisco Art Association in 1871. Learn More...