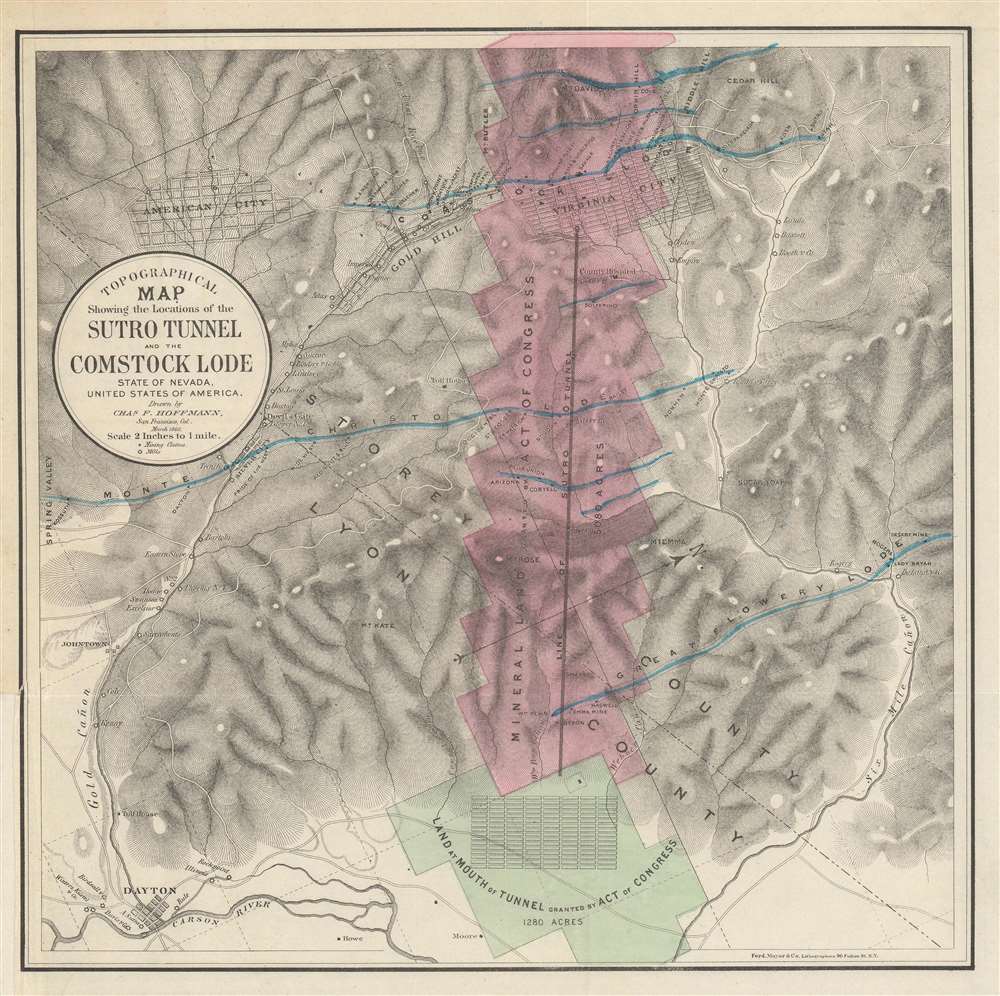 A 3-mile-long architectural wonder made for the Comstock Mines.
$600.00

This is an 1866 Charles Hoffmann map of the Sutro Tunnel and the Comstock Lode in Nevada. Depicting the area from Spring Valley to Six Mile Cañon and from Mt. Davidson to the town of Dayton, Nevada, the land granted to the Sutro Tunnel Company is colored in pink and green. A solid brown line marks the tunnel, extending over three miles into the mountain, to reach the Comstock mines under Virginia City. The towns of Virginia City, Gold Hill, American City, Silver City, and Dayton, all of which were founded by miners seeking their fortune, are illustrated and labeled. Individual mills and mining claims are also identified.

The Comstock Lode was a massive silver ore discovery under the eastern slope of Mount Davidson, in the Virginia Range in Nevada. Named after the miner, Henry Comstock, the Comstock Lode was the first major silver mine in the United States. Mount Davidson had deposits of both gold and silver, and was mined for gold from about 1850. History credits Ethan and Hosea Grosh with the discovery of the mountain's extraordinary silver deposits - the Comstock Lode - in 1857. Although they discovered the Comstock Lode, neither Grosh brother profited from the claim. The uneducated miner Henry Comstock was charged with taking care of the Grosh cabin. Rooting around inside, he found a chest full of silver and gold ore. Comstock claimed the cabin and surrounding lands under his own name and proceeded to mine. The find became public knowledge in 1859, after which fortune seekers flooded the area, staking mineral claims and founding mining camps that would later become towns. Several bonanzas ensued, creating a cadre of instant millionaires. Most Comstock Lode mines began to decline after 1874, but prospectors still worked claims through the 1920s. Between 1860 and 1880, nearly seven million tons of ore were extracted and milled in the Comstock district. During 1877, its peak year, over $14 million in gold and $21 million in silver were extracted. The Comstock Lode mines also led several technological advances, including square site timbering and the Washoe silver smelting process.

As mine shafts sunk further into the ground, miners began to encounter a new problem: lots and lots of water. Historically, mines pumped water to the surface, but the volume of water at the Comstock Mines was unprecedented. Adolph Sutro offered another solution. First proposed by Sutro in 1860, the Sutro Tunnel is a drainage tunnel connected to the Comstock Lode mines that would drain the water without the need for expensive pumps. At first, the idea gained widespread approval, but soon mining companies began to turn against it, suspecting that Sutro would use the project to claim mineral rights. It took five years for Sutro's idea to acquire legislative go-ahead. After finally receiving approval, Sutro formed the Sutro Tunnel Company and sold stock certificates to raise the funds. He also raised money among the miners, suggesting that the tunnel would make mining easier and safer. Construction began in 1869 and broke through into the Savage Mine on September 1, 1878, nine years later. The project's final cost was about $2 million. Unfortunately, by the time the Sutro Tunnel was completed, the Comstock Lode mines had already entered their decline. Nonetheless, to this day, the effective tunnel keeps the upper sections of the Comstock Lode mines dry. As for Sutro, soon after construction ended, he sold his stake in the company and moved to San Francisco, where he built the Sutro Baths and a smaller 'Sutro Tunnel'. He also became a successful real estate investor and later mayor.

This map was created by Charles Hoffmann and accompanied Sutro's book The Mineral Resources of the United States, and the Importance and Necessity of Inaugurating a Rational System of Mining, with Special Reference to the Comstock Lode and the Sutro Tunnel in Nevada. Six examples are cataloged in OCLC and are part of the institutional collections at Princeton University, the University of California - Berkeley, the Wisconsin Historical Society, the University of Texas at Arlington, Harvard College, and the California Historical Society. Scarce on the private market.

Charles Frederick Hoffman (February 29, 1838 - June 20, 1913) was a German-American topographer. Born in Frankfurt, Germany, Hoffman attended engineering school in Germany before immigrating to the United States. He arrived in California in 1858 and was recruited by Josiah Whitney to the California Geological Survey, where he worked as a topographer. Hoffman is credited with introducing topography to the United States and helped explore the Sierra Nevada Mountains from 1860 to 1870. He then spent 1871 and 1872 as a Professor of Topographical Engineering at Harvard University, before returning to California to continue his work with the California Geological Survey in 1873 and 1874. While a member of the Survey, Hoffman achieved several first ascents of mountains in the Sierra Nevada, including Mount Brewer, Mount Dana, and Tower Peak. After leaving the Survey, Hoffman worked as a consultant for major banking firms and other conglomerates examining and reporting on mining properties in British Columbia, Mexico, Alaska, Siberia, and along the Pacific Coasts of the United States and South America. He founded the Red Point and Hoghead Gravel mines in 1886 - 1887 for the Societe Anonyme de Golden River', a French corporation. He also worked as their manager for many years. Hoffman married Lucy Mayotta Browne in 1870, with whom he had four children. Mount Hoffman in Yosemite National Park, is named in his honor. Learn More...

Sutro, A., The Mineral Resources of the United States, and the Importance and Necessity of Inaugurating a Rational System of Mining, with Special Reference to the Comstock Lode and the Sutro Tunnel in Nevada, (Baltimore: John Murphy) 1869.