1943 Minneapolis Tribune Map of Norway, Sweden, and Finland in WWII 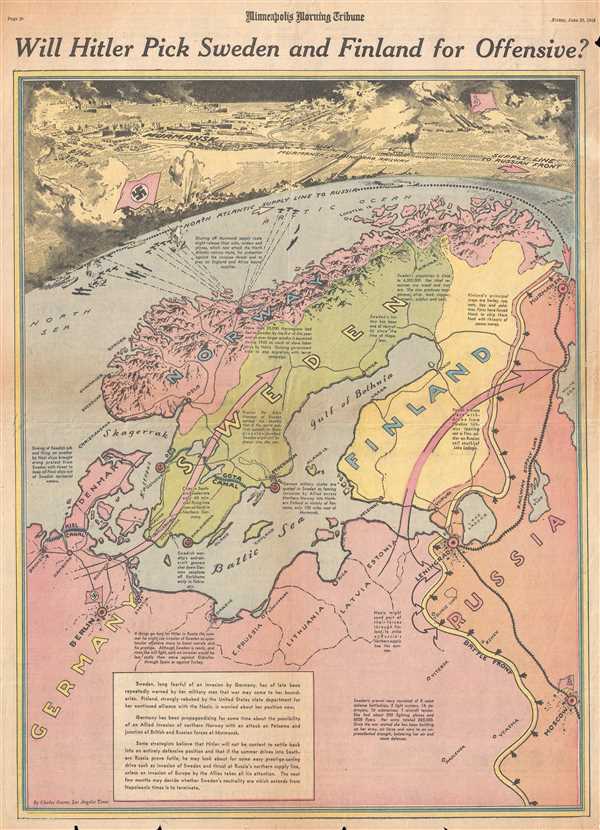 1943 Minneapolis Tribune Map of Norway, Sweden, and Finland in WWII

Speculates on a possible German invasion of Sweden and Finland in the summer of 1943.
$230.00

This is a Friday, June 25, 1943 Charles Hamilton Owens and Minneapolis Morning Tribune map of Scandinavia. The map depicts the region from the North Sea to Russia and from the Arctic Ocean to eastern Europe. By late June 1943, the summer offensive on the Eastern Front had not yet been decided and speculation was rife as to where the Allies would strike next, following their victory in North Africa. Meant to inform the viewer of one possible sequence of events, the proposed German invasion of Sweden and Finland would open a new front against the Soviets. The possible capture of Murmansk would mean cutting off the importation of American war materiel into the Soviet Union. This would free German naval assets to attack Allied convoys ferrying troops and supplies to North Africa and Britain. The invasion of Sweden and Finland also would severely reduce any advantage the Allies would gain if they were to invade northern Norway, one of the possible points of the next Allied invasion in the summer of 1943. One of the goals of a potential Allied invasion would be to protect Murmansk. All of this speculation would become unimportant by the beginning of July, as the Allies would launch their invasion of Sicily on the ninth. A spectacular drawn view of Murmansk and the Murmansk-Leningrad Railway occupies the top portion of the page, complete with ships importing supplies to the Soviet Union and a train hurtling its way to Leningrad. German and Soviet artillery lob shells at each other from opposite sides of the imagined view.

A Brief History of World War II in Scandinavia until 1943

World War II in Scandinavia is much more nuanced than this map conveys. Sweden's role in the war is complicated, at best. Officially neutral, Sweden had allowed the transit of German troops from Norway to Finland following the German invasion of Norway in April 1940. The Swedes had also been exporting iron ore to both Allied and Axis powers since the war's onset, while maintain their 'neutrality'. Finland, on the other hand, had fought a war against the Soviet Union in 1939-40, known as the Winter War, and was currently fighting alongside the Wehrmacht in what has become known as the Continuation War against the Soviet Union. This partnership blossomed following the German invasion of the Soviet Union in 1941, with the Finns hoping to regain the territory they had lost to the Soviets during the Winter War.

When Charles Hamilton Owens drew this map, he was doubtless inspired by the work of Richard Edes Harrison, an American illustrator and cartographer who, working for Fortune magazine, pioneered a new style of representing the world for WWII era propaganda maps. Edes developed the convention of using spherical perspective with an exaggerated vertical dimension, as on the present map, to illustrate part of the world as part of a greater global situation. This map was drawn by Charles Hamilton Owens and published in the Minneapolis Morning Tribune on Friday, June 25, 1943.