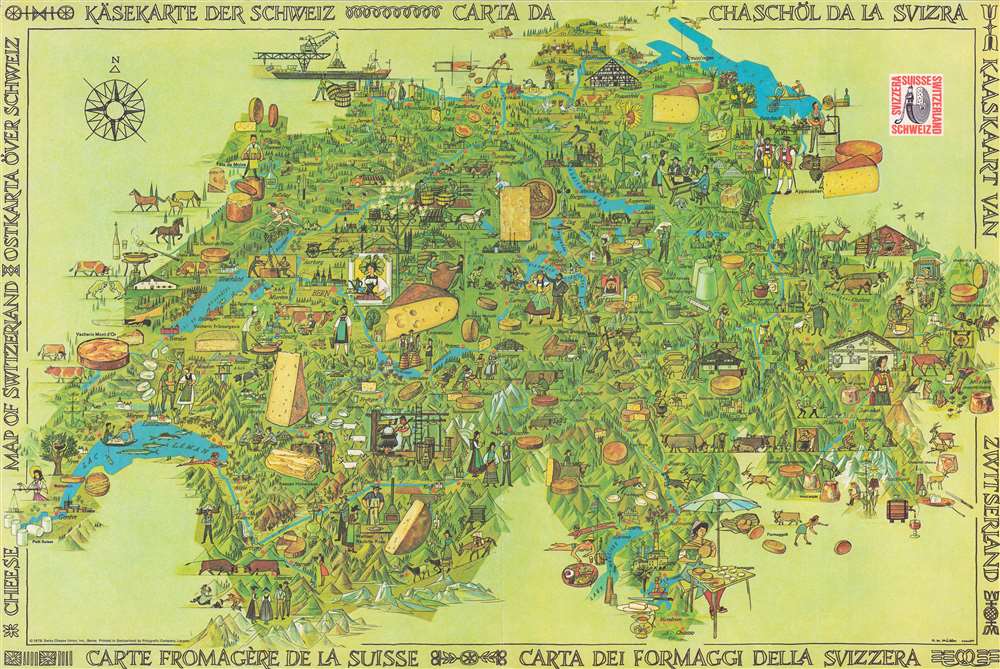 A celebrated 1978 Otto M. Müller pictorial propaganda map of Switzerland illustrating cheese production. The map was issued by the despotic Schweizer Käseunion (Swiss Cheese Union), a corrupt cartel intent on limiting and controlling Swiss cheese production. It promotes the 14 cheeses supported by the SCU, among them reblochon, raclette, gruyere, Emmental, and Tilsiter - ignoring the thousands of other cheeses the union disowned. This map, and other propaganda efforts, are responsible for transforming fondu and raclette into national dishes and marginalizing Switzerland's centuries old cheese making traditions.

The Swiss Cheese Union (Schweizer Käseunion) was a cartel formed in 1914 to control the production and price of Swiss cheese. The SCU, originally intended to manage quality, rapidly devolved into an autocratic organization that used strong-arm tactics to control cheese production throughout Switzerland. They mandated production be limited to just 14 'name controlled' varieties where previously there had been thousands. Moreover, the SCU bought the entire production and distribution of cheese at prices set by the Swiss Federal Council. Over some 80 years, the SCU's efforts devastated centuries of traditional cheesemaking causing production methodologies behind countless heritage cheeses to be forgotten. At the same time, the SCU dedicated itself to propagandizing the few cheeses it did support, chiefly Gruyere and Emmental, promoting the adoption of fondu and raclette as national dishes - when before they had been but regional specialties. In the 1990s, a rebellion of sorts emerged as cheese makers, led by Sepp Barmettler, began resurrecting heritage cheeses against the considerable opposition of the SCU. Corruption charges were leveled against the cartel in the 1990s, and by 1999 the SCU collapsed entirely, leading to a flowering of new cheeses, including recreations of old recipes and continuations of classics.

This map was drawn by Otto M. Müller and published by the Swiss Cheese Union, Inc. in 1978. We note two examples in OCLC: Zentralbibliothek Zürich and the Bayerische Staatsbibliothek. Müller's cheese map was published in various editions between 1967 and 1994, although today it is quite rare, with only a few examples cataloged in OCLC.

Otto Martin Müller (March 16, 1913 - November 30, 2002) was a Swiss artist and graphic designer. Müller was born and grew up in Zurich, Switzerland. He apprenticed as a lithographer from 1928 to 1929. Afterwards he matriculated at the Art Institut Orell Füssli where he was exposed to German Expressionism and the Bauhaus Dessau. Müller started working as a freelance graphic designer in Zurich in 1934, and in 1937 he received commissions from the Swiss Traffic Center. Among these works was a pictorial map of Switzerland, which was published in 1941. This map was his first major success. Afterwards, he designed several other pictorial maps of Zurich, Graubündchen, and Ticino. He also created title pages and illustrations for books. His most well-known piece is his 'Cheese Map of Switzerland' issued for the Schweizer Käseunion, published in various editions from 1967 to 1994. Müller died in Affoltern am Albis on November 30, 2002. Learn More...