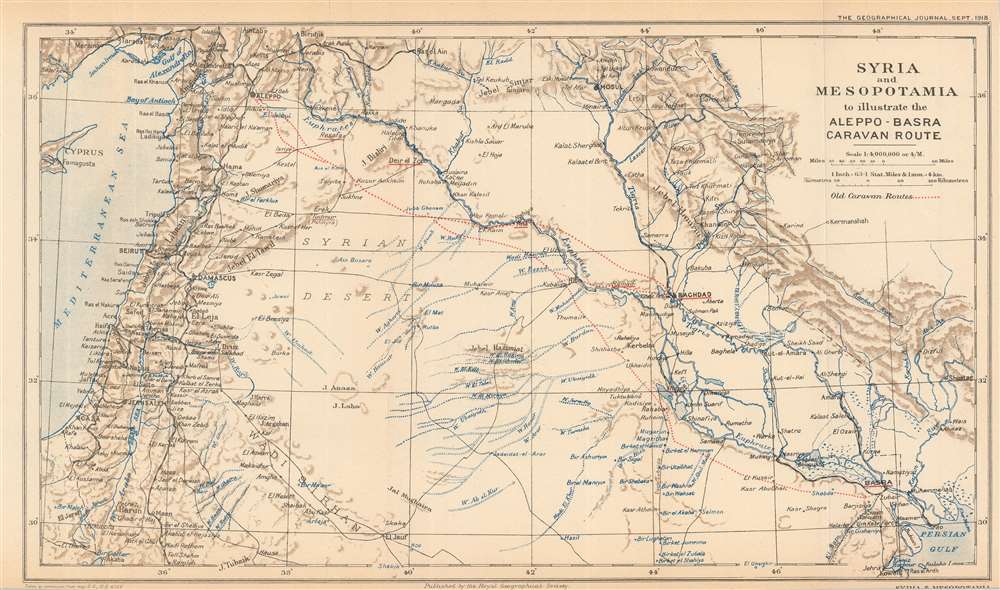 The oldest connection between Europe and Asia: the Aleppo - Basra Caravan Route.
$375.00

This is a 1918 Royal Geographical Society map of Syria and Mesopotamia, highlighting the ancient caravan route between Aleppo and Basra. Depicting from Cyprus to the Persian Gulf, red dotted lines trace the old caravan routes between Aleppo, Syria, and Baghdad and Basra, Iraq. Aleppo, Baghdad, and Basra are underlined in red to emphasize their importance. Numerous other cities, including Jerusalem, Beirut, Mosul, Gaza, and Damascus, are identified, and the region's rivers, including the Tigris and Euphrates, are illustrated in blue. The Hamrin Mountains, a mountain range in northeastern Iraq, act as the map's eastern boundary.

Since ancient times, connections between Europe and Asia proved profitable and created wealth and prestige for whoever controlled those trade routes. The overland route between Aleppo and Basra, along the Euphrates River Valley, is the oldest and most direct link. Beginning with the ancient Phoenicians, traders have braved the desert between these two cities. Venetians and Genoese dominated the route for centuries and played a part in bringing worldwide renown to their city-states. Then the Mongols, and then the Turks, invaded the Euphrates Valley and closed the overland route to European traders. By the time Europeans could return to this legendary trading highway, its importance had been overtaken by water routes to India and the Far East that were first controlled by the Portuguese and then the British. The desert route reemerged in the early 17th century and became part of celebrated travelogues, but the golden age of trading between Aleppo and Basra had passed.

This map was created by the Royal Geographical Society from a Geographical Section of the General Staff map with permission from the G.S.G.S. and published in the September 1918 edition of The Geographical Journal. Three examples are cataloged in OCLC and are part of the institutional collections at the Library of Congress, the British Library, and Stanford University.