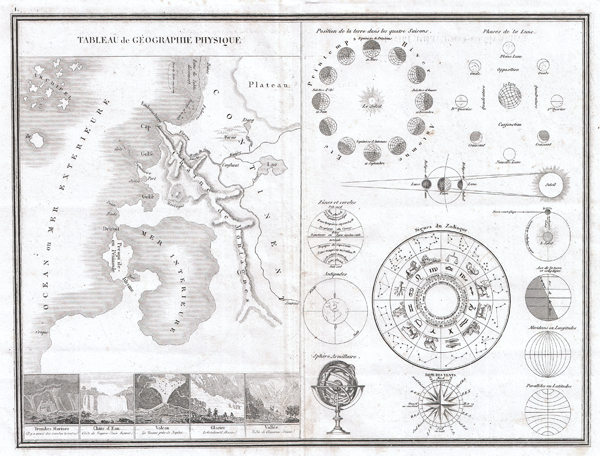 This is a very unusual 1838 map and astronomical chart by M. Monin. Divided into two sections. The left section is a Geographical Tableau, essentially a map of nothing, showing various geographical features and how they can be displayed. Shows mountains, plains, gulfs, seas, archipelagos, swamps, lakes rivers and plateaus, among others. Along the bottom there are five engraved images of geographical sights and events including tornadoes at sea, a waterfall, a volcano erupting, a glacier and a valley. The right side of this map is a Astronomical chart, itself divided into various elements. Includes a diagram of the seasons, a map of the phases of the moon, a representation of the Zodiac, a lunar and solar eclipse diagram, an Armillary sphere, etc… Prepared by M.Monin as plate no. 1 in the 1838 issue of Atlas Classique de La Geographie Ancienne, du Moyen Age, et Moderne…

Charles V. Monin (1830 - 1880) was a French map publisher working the early to mid 19th century. A progressive printer, Monin was one of the first cartographic printers in Europe to take advantage of the newly discovered lithographic engraving process. His workshops in Paris and Caen, France, produced three important atlases as well as numerous independent issue maps. Monin was a member of La Sociéte de Géographie in Paris. He is known to have worked with other French map publishers including Vuillemin and Fremin.

Very good condition. Minor spotting to margins. Original centerfold. Blank on verso.
Looking for a high-resolution scan of this?