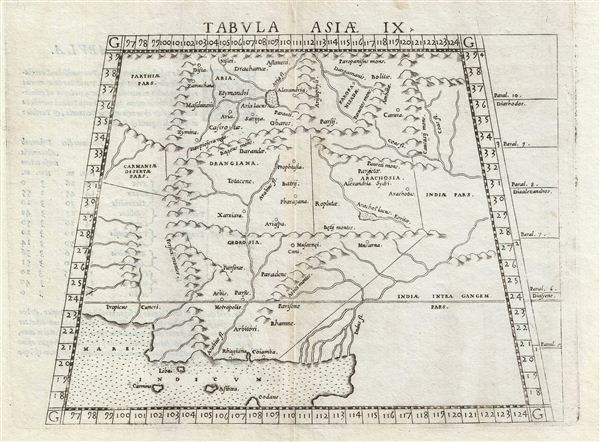 This is an uncommon 1588 Ptolemaic map of Persia, Afghanistan, and Pakistan issued for Girolamo Ruscelli's Italian edition of the Geografia di Tolomeo. Cartographically Ruscelli based this map on interpretations of Claudius Ptolemy's Geographica by Bernard Sylvanus and Sebastian Munster. The map covers the regions between the ancient Parthia and the Indus River valley and between Aria (Herat), and the Indian Ocean.

Though somewhat difficult to understand at first glance, this map corresponds to many actual locations and is upon close examination yields is secrets easily. The Indus Valley is readily identifiable on the right separating India (Indiae Intra Gangem) from Arachosia and Parisene - modern day Pakistan. Further east west, across the mountains we enter Gedrosia - a Hellenized term corresponding to today Balochistan in southwest Pakistan and southern Afghanistan. Further north, in the valley of the Helmand River, Drangiana, the modern day border region of Iran, Pakistan, and Afghanistan, is noted. North of Drangiana are the mountainous foothills of the Hindu Kush. In the midst of these mountains is set the valley of Aria, an ancient Satrapy considered by Herotodus to be the breadbasket of the Persian empire, and corresponding to the modern city of Herat. The lake seen here and identified as Aria Lacus, is in fact Zarah - a wetland in western Afghanistan.

A fine, collectable, and early piece essential for any serious collection focused on the cartographic emergence of Persia and Afghanistan in european maps. Published in Girolamo Ruscelli's Italian edition of the Geografia di Tolomeo.

Claudius Ptolemy (83 - 161 AD) is considered to be the father of cartography. A native of Alexandria living at the height of the Roman Empire, Ptolemy was renowned as a student of Astronomy and Geography. His work as an astronomer, as published in his Almagest, held considerable influence over western thought until Isaac Newton. His cartographic influence remains to this day. Ptolemy was the first to introduce projection techniques and to publish an atlas, the Geographiae. Ptolemy based his atlas on the "Geographiae" of Strabo, the cartographic materials assembled by Marinus of Tyre, and contemporary accounts provided by the many traders and navigators passing through Alexandria. Ptolemy's Geographiae was a ground breaking achievement far in advance of any known pre-existent cartography, however, it was not without flaws. In a masterstroke of ego that would last over 1,500 years, Ptolemy filled the many unknown and unexplored lands with mountains, lakes, and rivers that he merely assumed must exist. His other great error involved his use of the Cape Verde Islands as a Prime Meridian, thus wildly over estimating distances east of this point, and conversely underestimating the distances west. The ultimate result of this error was Columbus's fateful expedition to India in 1492. In any case, though the text of Ptolemy's Geographiae did survive, the maps that supposedly accompanied it did not. The earliest known Ptolemaic maps are in manuscript format and date to approximately 1300. Most of Ptolemaic maps that have come down to us today are based upon the manuscript editions produced in the mid 15th century by Donnus Nicolaus Germanus, who provided the basis for both the 1477 Bologna and the 1482-6 Ulm Ptolemies. Even after printed versions became broadly available, later authorities - Waldseemuller in 1513, Mercator in 1578 - would consult early manuscript Ptolemies in revising new editions of the work. Learn More...