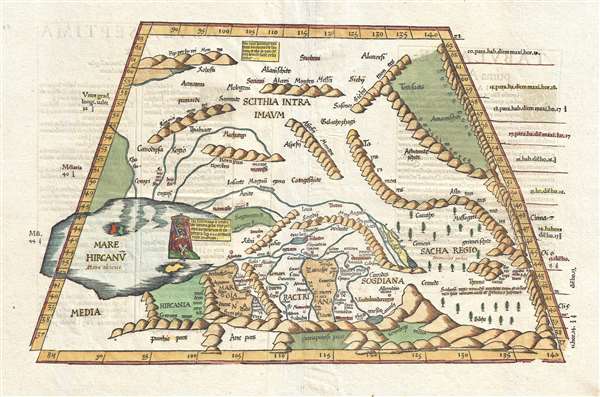 A fine example of the 1541 Strasbourg or 'Servetus' edition of Lorenz Fries' Ptolemaic map of central Asia. The map's coverage extends from the western Caspian Sea and the Central Asian Steppe, Afghanistan, including all or parts of modern day Kazakhstan, Turkmenistan, Iran, Afghanistan, Uzbekistan, and Iran. The Himalayas are evident at the base of the map and have a rope-like aspect. The map exhibits the typical trapezoidal projection common to early Ptolemaic maps.

The Rediscovery of Ptolemaic Geography

This map is based upon the geography of the 2nd century Alexandrian mathematician and cartographer Claudius Ptolemy. Although it is not clear if Ptolemy actually produced any maps, his Geographia provided detailed instructions as well as a list of coordinates that could be used to construct a comparatively modern map. It is thus that Ptolemy is considered to be the Father of Modern Geography. After the collapse of the Roman Empire and throughout the Middle Ages Ptolemy's work was lost to Europe but preserved by Islamic scholars. His work was rediscovered by Venetian scholars via their Arabic and Turkish connections in the Enlightenment. European editions of the Geographia with maps, perhaps the first maps actually made using Ptolemy's instructions, began appearing from around 1477. A deep insight into the Enlightenment can be had by understanding that although European scholars were eager to get their hands on new editions of Ptolemy's Geographia, it was not so that they could understand their own world, or travel, but rather so that they could place the ancient cities that were so commonly references in the works of antiquity they were aggressively unearthing.

History of this Map

This map was first issued by Lorenz Fries, an Alsatian physician, mathematician, and friend to the great cartographer Martin Waldseemüller. Fries was duly impressed with Waldseemüller's cartography and, when determined to issue his own revised editon of Ptolemy based on his friend's work. Fries partnered with Johannes Grüninger, one of Waldseemüller’s publishers to compile and engrave the work. The reduced Fries edition of Waldseemüller was published in Strasburg in 1522. Fries expanded the scope of Waldseemüller's map with three new maps, including an important map of East Asia. Grüninger published a second edition in 1525. When Grüninger died in 1531, his son Christoph sold the plates to the Lyonese publishers Melchior and Gaspar Trechsel. The Trechsel brothers hired the controversial Spanish polymath Michael Villanovus, or 'Servetus,' to rewrite the text, publishing a new edition in 1535. Gaspar Trechsel published an additional solo edition in 1541, from which the present example was extracted.

The Heresy of Michael Villanovus or 'Servetus'

Servetus, who wrote the text on the back of this map and the others in the Trechsel editions of the Geographia was denounced as a heretic in 1553 by Guillaume de Trie, a merchant of Geneva and friend to John Calvin. It his trial, Servetus was condemned on two accounts of hearesy: nontrinitarianism, or denying the Holy Trinity, and anti-paedobaptism (anti-infant baptism). While Calvin himself was not present at the trial, it is generally believed that he was behind Servetus' sentence. On October 27, 1553 Servetus was burnt alive on top of a pyre of his own books, among them most examples of the atlas from which this map was extracted.