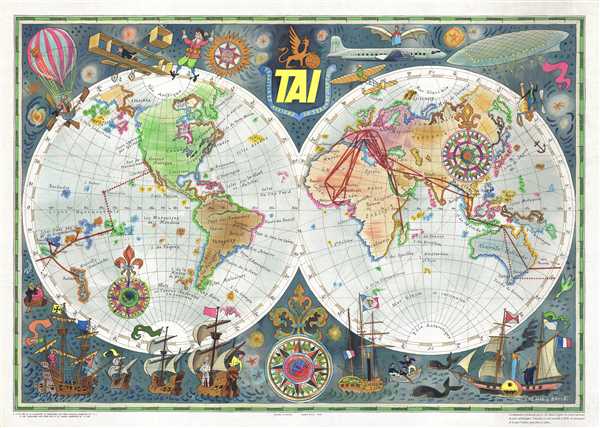 This is a 1959 Luc-Marie Bayle route map of the world created for Transports Aériens Intercontinentaux (TAI), a private French airline which operated from the early 1950s until it merged with Union Aéromaritime de Transport in October 1963 to form UTA French Airlines. The map depicts the world in two hemispheres: from New Zealand and New Caledonia to the Americas and from Europe and Africa to Asia, Australia, and New Britain. Numerous locations throughout the world are labeled, including Peru, Patagonia, Louisiana, 'New Spain' (Mexico and Central America), and New Holland (Australia) to cite only a few. Evidently antiquated place names were employed by the artist, along with a fanciful font. The exception to this motif, however, applies to the cities along TAI routes. These cities are labeled in block lettering that easily sets them apart from the rest of the map, such as Saigon, Jakarta, Brisbane, Ouagadougou, Bamako, Paris, Bordeaux, Auckland, Nouméa, and Espiritu Santo. Very few modern countries are labeled, not even France. Beautiful and entertaining illustrations frame the central map. Planes fly along the top border including a zeppelin, a number of early aircraft, and a DC-6, the workhorse of the TAI fleet. An ornate sun, which bears a resemblance to the ornate compasses illustrated on the map, appears along the top border as well. Along the bottom border, large sea-going sailing ships, from the antiquated galleons to the, also antiquated, paddle-wheel steamer in the lower right corner. Birds, fish, and whales encircle the flotilla.

Delightfully illustrated and beautifully colored, this 1959 Luc-Marie Bayle Transports Aériens Intercontinentaux route map of the world would make an incredible addition to any collection. Although undated, by referring to TAI time tables, we learned that TAI did not begin flying the routes between Tahiti and Honolulu and Honolulu and Los Angeles until 1960 at the earliest, thus this map must have been created before those routes were finalized, but after they had been publicly announced.

Luc-Marie Bayle (January 30, 1914 - October 11, 2000) was a French naval officer, painter, and artist. He was born in Malo-les-Bains, France into a naval family. Both his father, who passed away when Bayle was nine, and his grandfather had served in the French navy. He entered the Naval Academy in 1932. He served in many different capacities and on several different vessels during his time in the Navy, including a mission to China in 1935 and two polar expeditions in 1949 and 1950, for which he served as official photographer, historian, and painter. He commanded the French Navy in Polynesia from 1956 to 1958 and worked for the Navy Historical Service from 1959 to 1960. He served as the Director of the Musée National de la Marine from 1972 to 1980. Bayle was appointed Peintre de la Marine in 1944 and after the war ended he received an order for a tapestry for the officers of the Rue Royale. Bayle was an accomplished artist and drew and painted, mostly in watercolors. Learn More...