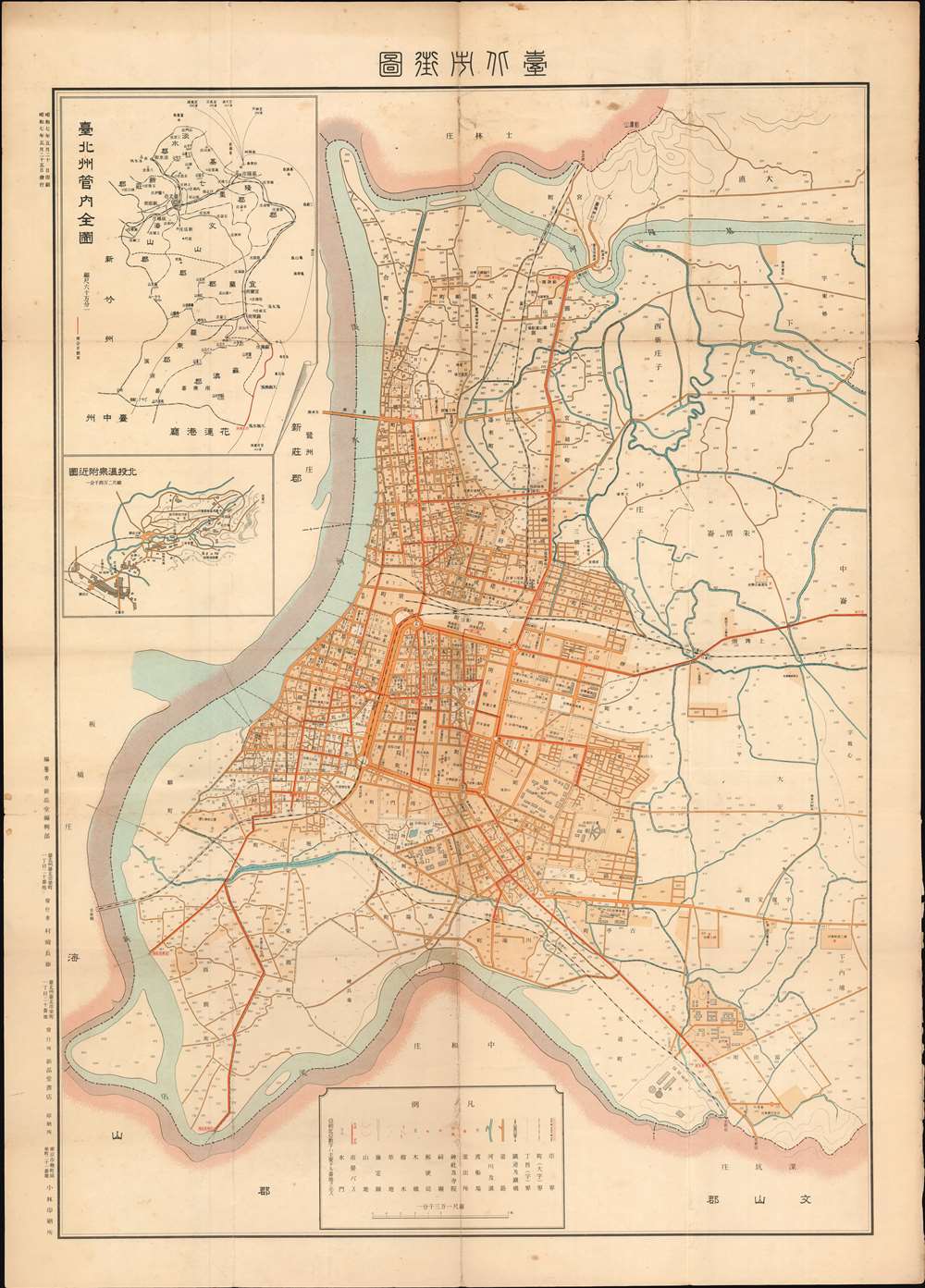 A large and elegant Showa 7 or 1932 map of Taipei, Taiwan, issued by Murasaki Chōei (村崎長昶) for sale in his Xin Gaotang Bookstore (新高堂書店). The map covers all of Colonial Era Taipei, but is centered on the old walled city - despite the fact that here the walls have by this time been replaced with major roads, trams, and rail lines. The map offers expanded coverage over earlier maps, encapsulating the full urban development of Taipei at the time, with new development areas to the north, east, and south. It is further is coded to illustrate developed areas (shaded orange), railroad lines, roads, and trams. An inset map in the upper left covers all of Taipei County / Taihoku Prefecture. Numbers fill the map. While most are unique, some are repetitive, and increase to about 900. It is unclear what these represent, but they may be coded to a key that has today been lost.

This map was published by Murasaki Chōei (村崎長昶) for sale in his Xin Gaotang Bookstore (新高堂書店). It was printed on May 20, 1932, and released on May 25 of the same year. We have identified examples at the Library of Congress, the University of Chicago, and the University of Wisconsin. We assume there are others in Japanese and Taiwanese collections, but have been unable to trace them. No market history.

Murasaki Chōei (村崎長昶; 1870 - 1960) was a Japanese book publisher active in Taipei, Taiwan. Murasaki is considered the founder of the Taiwan bookselling industry and was the largest bookseller in Taiwan during the Japanese Occupation (1895 - 1945). He studied at a private school in Japan before relocating to Okinawa in July of 1893. After the Japanese annexation of Taiwan following the First Sino-Japanese War (1894 - 1895), he was sent to Taipei with the Ministry of the Army. He initially handled engineering regulation and real estate sales for the Ministry. Later in 1895, he resigned to set up his own business, Muasaki Office, negotiating legal contracts and real estate sales. This business was apparently not very successful and Murasaki fell into heavy drinking. Despite this, in 1898, he founded another business, the Xin Gaotang Bookstore (新高堂書店). Initially a small stationer, the business grew rapidly. In 1915, he constructed a large three-story bookstore in Taipei's Changjing Village, at the modern intersection of Hengyang Road and Chongqing South Road. Other publishers and booksellers followed, transforming the area into an industry hub. By the time World War II broke out, Xin Goatang was the largest bookseller in Taiwan. After the war, Murasaki returned to Japan, where he died shortly thereafter. His bookstore, under new management, was renamed the Oriental Publishing House. The original brick building survived until the 1980s, when it was demolished and replaced with a modern mall known as the 'Oriental Building.' Learn More...

Very good. Some wear and toning on old fold lines. Reinforced archivally on verso were necessary.