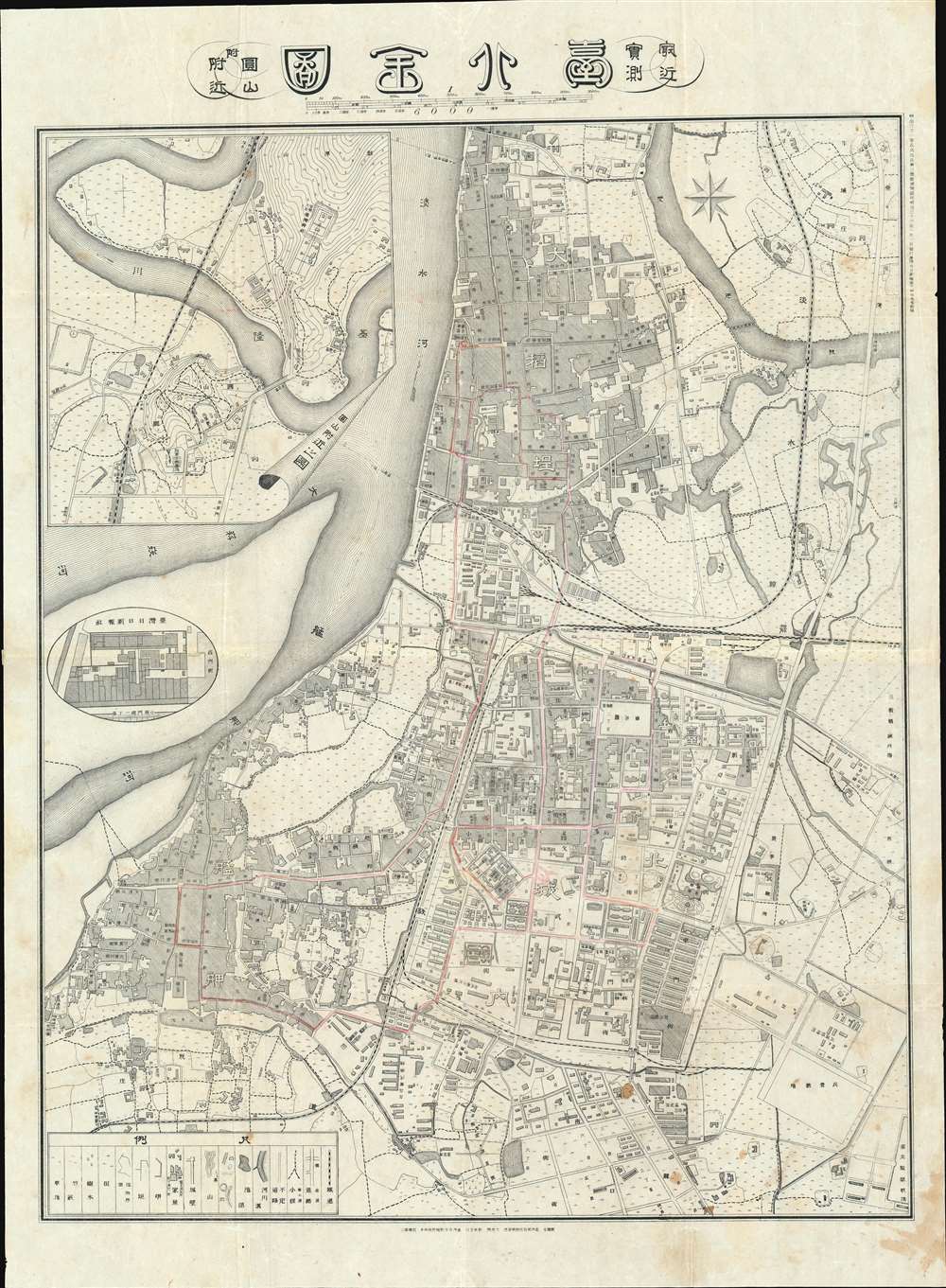 One of the earliest maps of Taipei published during the Japanese occupation of Taiwan.
$2,300.00

An extremely rare 1903 Meiji 36 Hikari Okura and Taiwan Nichi Nichi Shinpō map of Taipei city, Taiwan. This is one of the earliest maps of Taipei issued during the Japanese occupation of Taiwan in the early 20th century. It depicts Taipei's three-city area, including the old walled city and the extramural settlements of Mengjia (Bangka) and Dadaocheng. The map exhibits considerable advancement over earlier maps issued between 1895 and 1900, illustrating the extensive modernization and urban development projects going on throughout the city. A circular inset to the left of the urban center illustrates the Taiwan Nichi Nichi Shinpō newspaper's headquarters. Subtle manuscript highlights some streets referencing the growing Taipei tram system.

Intent on turning Taiwan into a model colony, the Japanese lavished resources on Taipei. By the time this map was issued, Taipei, what the Japanese called Taihoku, had transitioned from the ramshackle Qing Era city, to a thoroughly modern Japanese style metropolis. It included lighted streets, sophisticated zoning, trams, and trainlines. On this map in particular, the Taipei Train Station has been moved east to accommodate development. The map also portrays the early development of land beyond the city wall, including the residential and commercial districts outside the West Gate and the government offices outside the East and South Gates.

A large inset in the upper left quadrant details the Yuanshan and Zhongshan Districts, north of the old city at a sharp bend in the Keelung River. Today this hilly region is the home of various parks, the Grand Taipei Hotel, and the significant Yuan Shan Archeological Site (圓山遺址). Considered the most important archeological discovered in Taiwan, this site was discovered by the Japanese in 1897, and thus is duly covered by this map. The site consists of a c. 2000 - 3000 BCE pre-historic shell mound where multiple stone implements, as well as bones and jades, were discovered.

The map is the result of a meticulous survey of Taipei completed by the Taiwan Governor General's Office civil engineer Hikari Okura (大倉熙). It was subsequently published by the Taiwan Nichi Nichi Shinpō (台灣日日新報社 / Taiwan Daily News), the publishing arm of the Japanese government in Taiwan. We have identified one example in the Taiwan national archives.

Taiwan Nichi Nichi Shinpō (May 1898 – March 1944) (台灣日日新報社 / Taiwan Daily News) was the official and most prominent newspaper in Taiwan during the colonial period from 1895-1944. It began publishing in 1898 following a merger of two older newspapers, the Taiwan Shinpō and the Taiwan Nippō. It was issued both in Japanese and Chinese as the official media outlet of the Japanese occupation, focused on legislation and cultural activities.