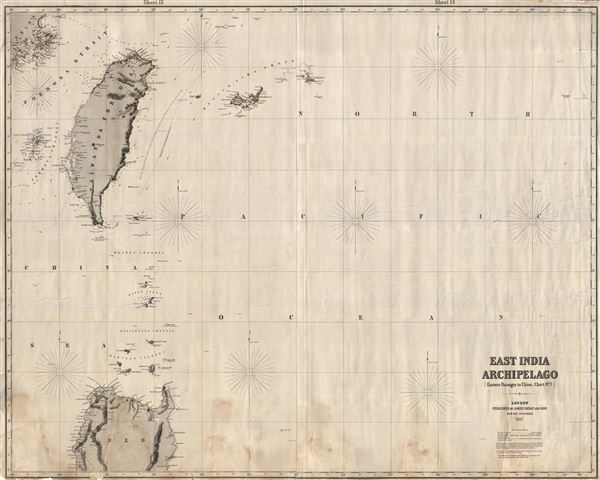 This is an extremely rare and highly desirable 1861 Imray blue-back chart depicting Taiwan (Formosa) and northern Luzon. Covers the regions between 16Â°30' to 25Â°40' North Latitude and between 188Â° 20' and 130Â° 20' East Longitude. Offers considerable detail along the cost of Formosa, particularly to the west in the Formosa Strait and around the Pescadore Islands. Countless depth soundings throughout. When Imray drew this nautical chart, very little was known about the seas between China and the Philippines. Indeed, the following note of caution appears in the lower right hand quadrant of the map:

The utmost care is requisite when navigating the seas comprised within the limits of this chart because they are very imperfectly known and it is believed that sunken reefs exist while have yet to be inserted on the chart, and the many of the known reefs are inaccurately placed in position.

Despite the general paucity of information available, this chart represents one of the best mappings of the Taiwan region to appear in the 19th century. This region was not fully surveyed until the Japanese conquest of Taiwan in the late 19th and early 20th centuries.

Good condition. Minor soiling and buckling. Some very so reinforcement. Wear and waterstains to lower quadrants. Distinctive blue backing. Would benefit from professional cleaning and rebacking on heavy linen.
Looking for a high-resolution scan of this?