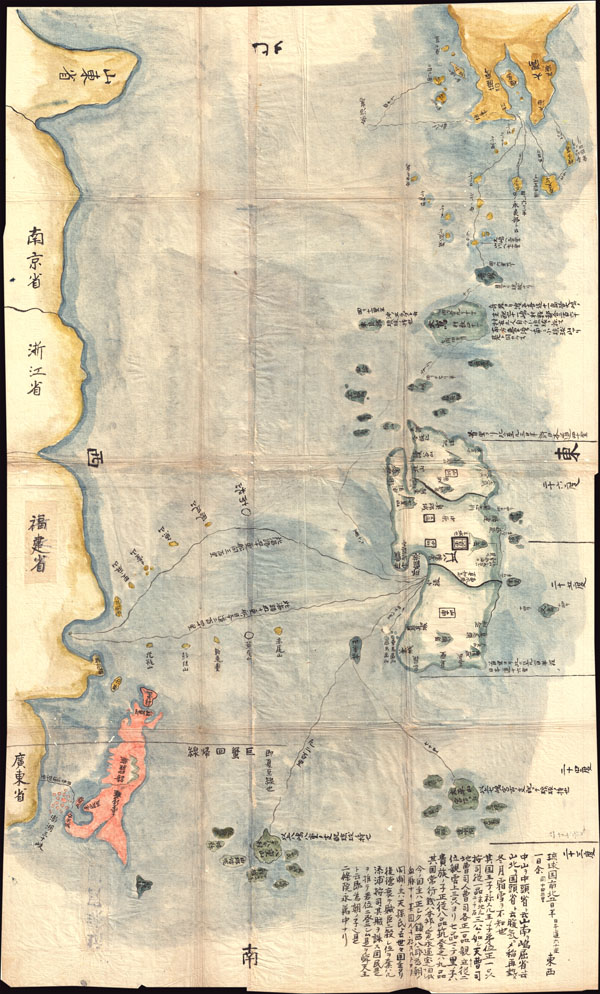 This extraordinary discovery is a previously unknown 1781 (Temmei 1 ) manuscript map of Taiwan and the Satsuma Daimyo. This rare map covers from the southern shores of Kyushu south along the Ryukyu Islands (including Okinawa) to Taiwan and the coastline of mainland China. The powerful Satsuma Daimyo, which flourished and enjoyed special privileges under the Tokugawa Shoguns, controlled much of the territory shown here. What is most remarkable about this piece is that knowledge of this region would have been very rare and restricted information during under the Tokugawa era Kaikin system of national isolation. Despite the isolationist policy, limited trade and information exchange did exist. One of the unique privileges associated with Satsuma control of the Ryukyu Islands was greater independence and freedom of foreign trade than most of Edo period daimyo were permitted. Consequently Satsuma trading vessels regularly traveled to Taiwan and mainland China thus acting as one of isolationist Japan's few links to the outside world. This chart can be best understood in this context – as a rare glimpse of Satsuma's nautical trade routes between Kyushu, Taiwan, and mainland China. Later in the Meiji period, the wealth, power, and international sophistication of the Satsuma Daimyo would have a significant influence on the Meiji Ishin or Meiji Restoration. A once in a lifetime find.